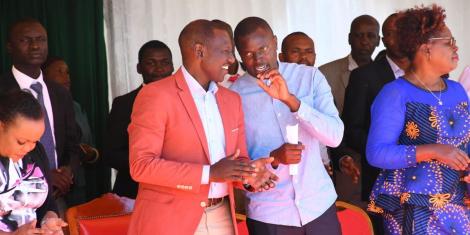 A video of Deputy President William Ruto speaking in Baringo County back in July 2016, has resurfaced over the last 24 hours, due to how ironical his statements seem to be when placed in the current context.

The DP was in a bullish mood back then as he tore in Senator Gideon Moi’s KANU Party over its loss during the 2013 General Election.

“Watu wa KANU hapa wakapanga lakini hawakujua ata wanaenda wapi. Mwisho hawakupata serikali wala upinzani, (KANU members tried to fight for a seat in government without a clear direction. In the end, they never got into government nor the opposition).

“Sasa hawajijui wako wapi, ndio unaona wanamanga manga. Hawaelewi wako pande gani, wananhangaika tu hapa kati kati, (Now they don’t know which side they belong to which is why you see them all over),” a buoyant Ruto stated at the time.

Flashforward to 2020 and the very party he described as rudderless seems to be making moves to place itself within the ruling party.

On May 11, KANU’s Secretary General Nick Salat confirmed that he had deposited a coalition agreement between his party and Jubilee with the Registrar of Political Parties.

“It is an open secret that we have been working with Jubilee. You remember that the Jubilee Party leader, His Excellency President Uhuru Kenyatta came to our convention in 2017 na tukasema tuko ndaaani ndani, and we have never wavered ever since then,” Salat said.

Murkomen and Kihika have since sought the aid of Senate Speaker Kenneth Lusaka, to reverse the results of the controversial State House impromptu meeting.

“We held consultative meetings and would like to inform the speaker that the requirements of the Standing Order 19 that make it mandatory for more than half of the senators to remove a majority leader or majority whip was not met,” reads an excerpt of the letter sent out to the Senate speaker.

The two received some reprieve on Tuesday, May 12, when the Political Parties Disputes Resolution Tribunal suspended the merger between Uhuru and Gideon Moi’s party.

The ‘ground’ beneath DP Ruto’s feet has shifted significantly since July 2016, with his arch-rival Raila Odinga now firmly part of the president’s inner circle, while the DP’s close allies seem to be pushed even further out.

New and unexpected alliances seem to the new normal, with Wiper Party leader Kalonzo Musyoka recently expressing his interest in joining the ruling party as well.