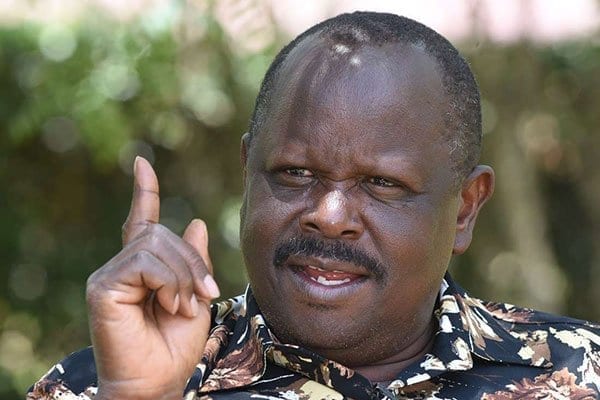 Chama Cha Mashinani party leader, former Bomet Governor Isaac Ruto, has denied claims that he has been offered a Cabinet position by President Uhuru Kenyatta to support his house cleaning in Jubilee.

Instead, he says he is helping the President on promoting economic recovery. Dr Ruto, a critic of Deputy President William Ruto, said his party will remain intact after signing an upcoming memorandum of cooperation with the ruling Jubilee Party. Excerpts:

Q: What informed the move by CCM which you lead, to go into a post-election coalition with President Uhuru Kenyatta’s Jubilee Party?

Kenya is faced with Covid-19 challenges, which have hit the economy hard, with the possibility of the crisis persisting a little bit longer.

This requires leaders of common interests, to come together and address key issues affecting the people. The time has come for us, as leaders to unite the country.

Does the coalition agreement entail folding CCM ahead of the next General Election?

CCM is not folding. That is not in the cards now or in the future. We are joining Jubilee as an independent partner.

We would not be party to a situation where we are taking the country to a single-party state. That would be retrogressive and an affront to democracy.

Political parties are formed to participate in governance, promote peace, patriotism and uphold our cultural heritage in a democracy.

Have you been offered a Cabinet position?

Our engagement with Jubilee right now is not about sharing positions but addressing socioeconomic issues affecting the country for the benefit of all in the society.

It is an issue that we have not discussed. We have not reached that level, but you cannot stop people from speculating.

Moving forward you will hear more stories out there, but we will remain focused on our agenda to unite the country.

You have been accused as having a bone to grind with Deputy President William Ruto, especially in your Rift Valley backyard, and that is what is informing CCM’s coalition with Jubilee at a time the DP is under siege from the party’s leadership.

I get flabbergasted when I hear that CCM is joining Jubilee to fuel the existing crisis in the party. If they have issues in Jubilee, it is up to them to sort them out.

We are not members of their party. By the way, there was a time we discussed CCM and Jubilee Party relations with the deputy president, but he insisted that we fold our party and join theirs.

We disagreed and told him it was not in our best interest. That was the end of that engagement.

But in the current arrangement, no one is telling us to dissolve our party, as we are negotiating with mutual respect to our institutions.

You met former Vice-President Kalonzo Musyoka, who is the Wiper party leader a few days ago, what was the thrust of your engagement?

We discussed a wide range of issues, including strengthening of institutions, entrenching devolution, the rule of law and cohesion in the country.

But it was not the first engagement with leaders of his ilk, as we previously held a session with ODM leader Raila Odinga at his offices in Upper Hill and discussed a myriad of issues.

What is your take on the falling-out in Jubilee?

It has to be understood, despite the coalition’s politics, that one person – the President – was mandated to run the country.

Re-organisation of government is his prerogative as the buck stops with him. Notwithstanding other persons around him, the President retains the responsibility of running a government.

Do you support a parliamentary or presidential system of government?

I would have preferred a parliamentary system, but I am willing to consider a hybrid system Martha Karua used to call a mongrel.

We cannot continue having a winner-takes-all situation; we must guarantee inclusivity in government.

As a former Council of Governors chairman, what is your view of the takeover of some Nairobi County functions by the national government?

The Constitution empowers the national government to suspend a county government and take over its functions during extraordinary times.

In this case, the county government was not suspended. There was a discussion between Mike Sonko and the State.

Nairobi was on the verge of dysfunction, with the governor suspended from office by a court of law.

The President could not leave health, infrastructure, water and key dockets unattended. You cannot fault the action taken by the national government even if the details of the pre-requisite articles on transfer of functions was not adhered to… the other option was to appoint a commission to run functions of the county and call for an election.

The President had to take action; he cannot just sit back and watch things go wrong. I have no issue with it for now.

Is implementation of devolution on course?

I am of the view the current relook at the Constitution through Building Bridges Initiative is an opportunity to address the issues affecting devolution. Functions were transferred to counties but money did not follow them.

We should have extended the life of Commission for the Implementation of the Constitution (CIC), as Transition Authority did not finalise unbundling of functions.

The CIC should have transited to Law Reforms Commission and I think we may need to bring it back.

Commission on Revenue Allocation was not strengthened and we still do not know, whether it is still there after former chairman Micah Cheserem left.

The Council of Governors and the Summit should be put in a constitutional pedestal and not an ordinary law. The Summit has not been working as it should.

Will you be seeking to reclaim the governor’s position or are you gunning for a national position?

We will cross the bridge when we get there. As of now, our focus is on uniting Kenyans, Constitution review and economic development.

When I conceded defeat in Bomet in 2017, I gave the late Joyce Laboso the assurance that I would not interfere in her administration and up to now, I have kept that promise even to her successor-Dr Hillary Barchok.