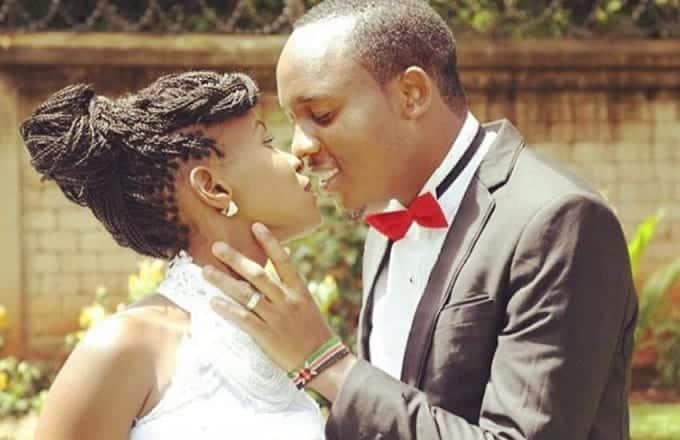 Screenwriter and actor Abel Mutua wedded his fiancé Judy Nyawira in a borrowed suit. This is after a man he tailored a suit from made a disappearing act on his wedding day, November 20, 2015.

Sharing the nerve-wracking experience via his Young and Stupid segment, Mutua narrated that he forked out Sh60,000 for the fine-tailored suit a month and a half to the wedding date.

The first red flag was when the tailor showed up days to the wedding with a different suit, a far cry from his bespoke piece that boasted fabric shipped exclusively from South Africa.

“He told me that my suit was okay and brought another suit with the same measurement which we used to measure how I would look on the wedding day in my suit. It wasn’t fitting but he told me that my own suit would fit,” said Mutua.

Like clockwork, his Sh60,000 dream to dazzle started to fall apart on the eve of the wedding.

“I saw the fundi the night to my wedding day. The material wasn’t even right. I was stressed because the wedding was already here. He went back with the suit for dry cleaning and said he was going to come back very early in the morning with it,” narrated Mutua.

Attempts to reach him the next morning failed. He later, hours into the ceremony, showed up and nonchalantly dropped the suit at the wedding’s reception area.

“We called him that morning and he wasn’t picking. I was supposed to be in church at 9:30 and the fundi wasn’t picking up. So we started borrowing clothes from neighbours.

We did the church wedding and then I received a call that the fundi had dropped a package at the reception. No, apology no remorse nothing,” added the former Tahidi High star.

That is not all. In 2018, Mutua heaped praise on TV talk show host and comedian Sande Bush, popularly known as Dr Ofweneke, for emceeing the wedding, at no cost.

A grand gesture from the comic he had only met three times prior. It all came about after he and wife Nyawira ran out of cash, and realized three days to the wedding that they had not hired an emcee.

“In 2015 my baby and I planned our wedding in less than a month. No committee, no nothing. It was heavy. Three days to the event after we’ve run out of cash it hits us that we forgot to get an MC. I pick up the phone and call this gentleman right here. Mind you we had only met less than three times before this day,” said Mutua.

“I tell him my story and without thinking twice, he tells me, ‘Bro! Arusi lazima ifanyike. Nitumie details zote, kitu ipigwe!’ He agreed to do it free of charge. I couldn’t believe it. There are good people out here.

“Dr Ofweneke is definitely one of them. I can only pray for you, sir. Hiyo stage ya BET lazima utakanyaga. Shukran Babaa. I appreciate you.”

The actor who rose to fame after playing the role of Freddie in the hit TV show Tahidi High met and dated Nyawira at Kenya Institute of Mass Communication (KIMC) where he was pursuing a film production course and majoring in camera techniques.

They campus sweethearts have been together since.

Pick Raila for NASA and Uhuru will be back, says Kalonzo ally