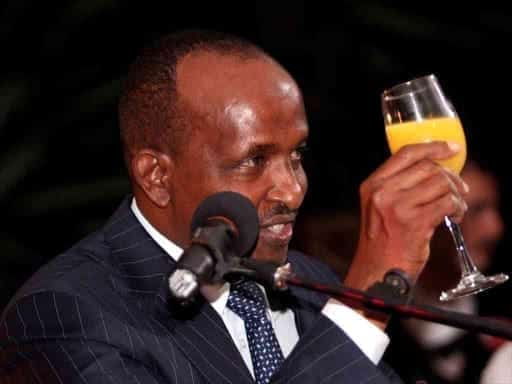 Uhuru, who is said to have been under pressure from his close political allies to fire Duale, sought Ruto’s input in their State House meeting.

The Star understands that it was in the lengthy talks, just two days to the Madaraka Day, that a deal on Duale was reached.

The President also met the DP for brief talks yesterday before calling in Duale as members waited in the tent.

Duale left the meeting room and joined anxious colleagues in the tent with critics taken aback at the rather unexpected “honourable” treatment.

The first purge that claimed Elgeyo Marakwet Kipchumba Murkomen and Susan Kihika as Senate Majority leader and Majority Whip respectively was ruthless with no consultations.

“The President and the Deputy President met Duale for a couple of minutes before we were addressed. It appeared they were giving him some instructions,” said a Jubilee MP who was at State House.

When the President headed to the tent with Ruto, he is said to have been categorical that while “he had pulled the sword, he would not draw the blood today (yesterday)”.

Kuresoi North Moses Cheboi was retained as the Deputy Speaker.

Wangwe was tasked to promptly reconstitute the committees within the next one week in another bloodbath that also expected to target Ruto’s allies in committee leadership posts.

Unlike the initial Senate PG snubbed by Ruto and his allies, yesterday the DP was present at State House during the stormy session with the National Assembly members.

Duale, a third time MP, had been earmarked for the chopping board over his dalliance with the DP, but some of the President’s allies and political foes as well have defended his track record.

The vocal MP is hailed to have fought huge Jubilee battles when the ruling party was pushing for key legislation in Parliament including the controversial security laws with no government bill having been lost.

However, the President’s allies still wanted him axed not on performance but on loyalty to Ruto instead of allegiance to the President.

Kieleweke leading light and Nyeri Town MP Ngunjiri Wambugu said while he was for the removal of Duale, he had no choice but to respect the party position.

The vocal MP enjoys some political clout as the spokesperson of the pastoralist communities and political kingpin of the Northeastern region.

Earlier, in an interview, Jubilee secretary general Raphael Tuju had affirmed that Duale’s fate lay in the hands of the President, who is the ruling party leader.

Party vice-chairman David Murathe had also put a strong case for Duale, arguing in previous interviews that the Garissa Township MP had sterlingly delivered on the President’s agenda.

The President’s retention of Duale is said to have caught all the 212 MPs at the PG by surprise given that they thought his goose was cooked.

“There were murmurs when the President read out the changes and some Kieleweke MPs were visibly agitated and thought it was a mistake not to mention Duale among those fired,” said a Jubilee MP who attended the PG.

The Kieleweke wing of Jubilee had fronted Kipipiri MP Amos Kimunya to take over from Duale in Uhuru’s aggressive campaign to take charge of the 349-House.

Jubilee has not had a joint parliamentary group secretary, leaving the onus of communicating and articulating the party political issues to Duale.