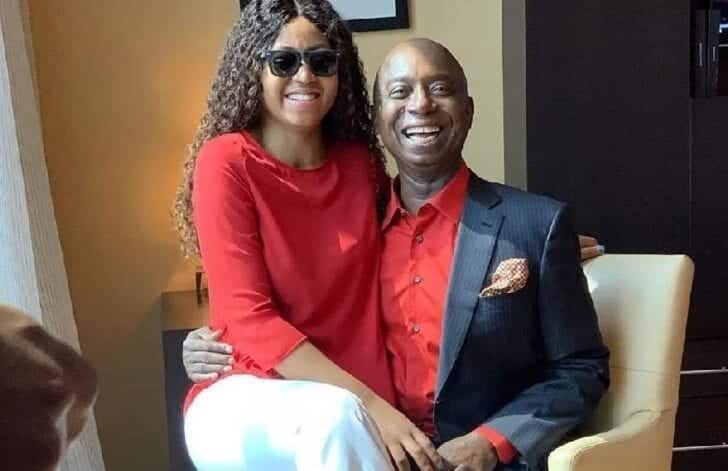 The 59-year-old tycoon took to his Instagram page where he shared a photo of the pregnant actress, sharing with the world, their happiness.

“It is now official,” he captioned the photo.

Reposting the same, the 19-year-old beauty revelled at the journey to motherhood saying she is excited and over the moon.

“I have never been this happy before, this feeling of becoming a mum is the most amazing journey of my life …I see myself speaking to my tummy all day, staring at the mirror and still can’t believe it. This child is about to change my entire life Oh! How much I can’t wait,” she wrote.

Before the announcement by Nwoko, speculations were rife on social media about her secretly kept pregnancy. Some curious internet users went as far as analyzing every new photo posted by the actress on her official Instagram page to pick on clues.

Richly married and at her prime, they awhile back made headlines when she revealed that her husband gets angry when she tries to cook.

“I cook, but he has stopped me, I cannot enter the kitchen. If I enter the kitchen he says ‘stupid girl why are you cooking? You have cooks’,” she told media personality Daddy Freeze in Dubai.

In his defence, the lawyer estimated to be worth over 3 billion Naira, clarified that she needs not to be in the kitchen, in the first place.

“I need her time for other things,” he said.

Asked whether their age difference was an issue, the teen idol underscored that she had no qualms about their union but was more worried about what her family had to say.

“The only thing I was worried about then was how I was going to tell my family. I didn’t think about outside. It was just my family,” said Daniels.

Nwoko and Daniels tied the knot back in 2019 in a traditional ceremony took place in Aniocha local government area, Delta State.

“I don’t think I would have married somebody of my age or a little bit older because I’m quite stubborn, very, very stubborn, my head is not down,” Daniels opened up on why she chose to marry someone older than her.

The politician, on his part, revealed that he taught the young actress how to swim and since then, he grew a soft spot for her and has always wanted to be closer to her even though she is not his first wife.

“I taught Regina how to swim. I love sports, I swim very well and I love to teach two or three people at a time. I have taught over 700 people how to swim over the past four years,” he said.