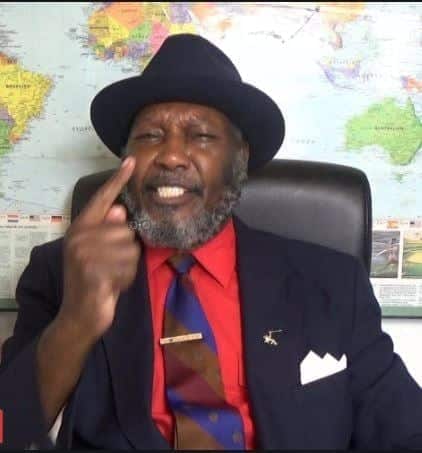 Ngatia was taken ill on Thursday August 27th 2020 and passed away few days later. Details of his death is not known yet but will be made available soon after consultation with the family.

Here below is a write-up by Okoth Osewe about who Martin Ngatia was:

Mr. Martin Ngatia, the Chairman of the Kenya Red Alliance (K.R.A), is increasingly gaining prominence online as a leading Kenyan revolutionary holding very radical views within Kenya’s political landscape. The Kenya Red Alliance has published numerous videos with Mr. Ngatia taking radical and leftist positions with regard to solutions K.R.A is putting forward to resolve the decades-old political and economic crisis precipitated by the progressive rot of capitalism in Kenya After the bgetrayal of the Kenyan Opposition by Raila Amolo Odinga, and following the death of Opposition politics in the country.
Mr. Ngatia is currently viewed by millions of suffering Kenyans as a personality who can easily seize power in Kenya if the Kenya Red Alliance decides to start an active mobilization of the oppressed people of Kenya for a power take-over Although the Kenya Red Alliance is slowly emerging as a real political alternative to the reformist, opportunist and ideologically bankrupt political parties in Kenya, who is Mr. Martin Ngatia? In 1982, Mr. Martin Ngatia was among others involved in the coup which overthrew the government of former dictator Daniel arap Moi.
More Related Stories
OBITUARIES

The “People’s Redemption Council” that was led by the late Hezekiah Ochuka, seized power for 24 hours before the coup was defeated by Moi’s loyalist soldiers, forcing the perpetrators to flee into exile in Tanzania Before he left Kenya, Martin Ngatia was a Kenya Airforce air-man and his profession was Technical Support Squadron (Aircraft Ground Equipment Machines) with the rank of Corporal.
Ngatia had been serving in the Kenyan Airforce before he fled Kenya after the coup failed. At that time, Ngatia believed that election rigging would never allow the gangster Moi regime to be toppled through a ritual called election While in exile in Tanzania, the 1982 Kenyan dissidents were betrayed by the late President Julius Nyerere.
The Tanzanian President struck a deal with Moi which led to the swapping of Tanzanian exiles in Kenya with Kenyan exiles in Tanzania. When the coup leaders were picked up from the camp where they had been granted asylum, Martin Ngatia escaped the dragnet because on the morning of the dragnet, he was not in the camp as he was visiting a friend Martin Ngatia is the only surviving member of those who had been implicated in the 1982 coup because the rest were executed by Moi on 10th July 1985 after they were repatriated to Kenya by former President Julius Nyerere.
Both Hezekiah Ochuka and Pancras Oteyo Okumu are among the top coup leaders who were executed by Moi after a kangaroo military court matial headed by Moi’s corrupt court officials While in Tanzania, Martin Ngatia teamed up with other Kenyan exiles who had been involved in the coup and the anti-Moi struggle to continue with their opposition to the dictatorship of Daniel arap Moi.
These included the late Kenyan journalist Onyango Osumba, the late Karundi Mathennge, the late Ayieko Singoro, the late Opwapo Ogae (who was in charge of communications during the coup), current Senator James Orengo among others When the dissidents were invaded by Tanzanian security, Kenyan opposition to the Moi dictatorship in Tanzania also fizzled. Once in Sweden, Martin Ngatia joined forces with other Kenyan exiles who later regrouped to establish the Mwakenya Movement.
They formed different anti-Moi, anti-imperialist Movements and organizations to continue fighting for the liberation of Kenya Ngatia’s house became the headquarters of meetings with leading anti-imperialist personalities at the time including writer Professor Ngugi wa Thiongo, Professor Shadrack Ghutto (who later relocated to South Africa), the late Mukaru Nganga (who later founded KENDA) Koigi wa Wamwere, Mwandawiro Mghanga, Okoth Osewe and other exiles who were active in Scandinavia and the United Kingdom.
Martin Ngatia’s professed political agenda in Kenya is not just to bring about democracy and respect of human rights but to overthrow the system of capitalism and imperialist exploitation in Kenya. Ngatia believes that while pro-capitalist politicians, boot-lickers, apologists, sell-outs and opportunists are to blame for the continuous political and economic crisis in the country, the rotten capitalist system is responsible for more than 55 years of debilitating poverty, economic stagnation, youth unemployment and general decay of the Kenyan economy, culture and social life. Martin Ngatia believes that the solution to the crisis in Kenya is a revolutionary overthrow of the thieving.
Source-https://kenyaredalliance.com/
http://kenyastockholm.com @makozewe

Kenyan killed in US while preparing to return home

VIDEO:Obama Girl’ unveiled-Girl who welcomed US President wants to be a pilot