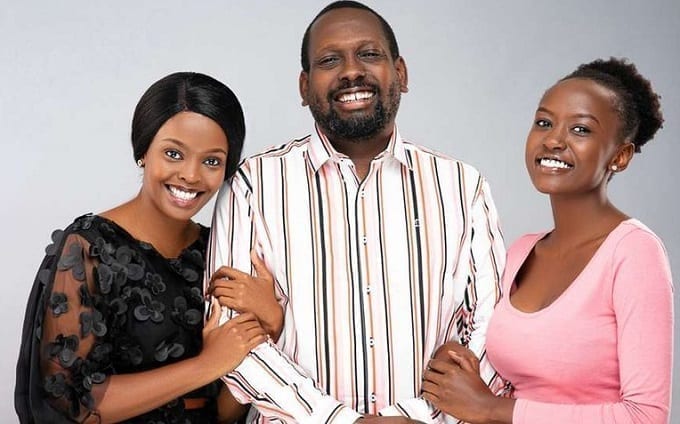 The film’s trailer was released on YouTube on September 2 and going by the comments posted so far, there is a palpable air of anticipation for the first ever Kenyan movie scheduled to premiere on Netflix.

Sincerely, Daisy is the title of the film directed by Nick Mutuma and whose main actress is Ella Maina, who has earned herself a legion of fans by playing Shee on NTV’s show Trap House.

In the trailer, one can see the gritty world Daisy lives in — a world that judges, is split on how to handle success, and which often leaves you to your own devices.

The film will premiere on a date yet to be confirmed by Netflix.

Its storyline revolves around Daisy, who having excelled in her final year of high school, her future seems secure. Things begin to take a turn for the worse when she realises that her family may not have the financial capability to support her dream of studying abroad. This realisation, coupled with life’s challenges, sets Daisy off on a downward spiral of unfortunate events that test her relationship with her family, boyfriend, and friends. The story is told in an hour and a half of film, and snippets of it were captured in the 2.31-minute trailer.

“We are going international,” commented Tash Njeri beneath the trailer. She is one of the 41,000 people who had watched the trailer by Thursday.

Lily Nimoh is also among those who have viewed it and are mesmerised by the quality it promises.

“For a moment, I forgot it was Kenyan. Great content; can’t wait for it,” she wrote.

Whereas there are a handful of Kenyan films available on on-demand viewing site Netflix, which is accessible in more than 190 countries across the globe, none has premiered on that platform. That is why Sincerely, Daisy will be trailblazing for Kenyan-made films.

How did the film come to be? It goes back to last year when actors Raymond Ofula, Peter Kamau and Neomi Ngang’a were picked as judges and mentors for The Next Superstar — a reality TV show that is a product of a collaboration between TV service provider StarTimes Kenya and the Beijing Municipal Bureau of Radio and Television.

With that came the first ever Sino-Africa reality television show that was designed to search for the next outstanding movie superstar. Under the initiative, Ofula, Kamau and Neomi were to pick and mentor up-and-coming actors to be featured in an international movie.

That international movie is Sincerely, Daisy — a family drama that was written by celebrated scriptwriter Natasha Likimani, who has worked on numerous projects like Veve, Kookoo Inn, and You Again. It was inspired by A Love for Separation, a Chinese drama series.

Nick Mutuma’s production company Giraffe Africa Productions prepared the film, and this will be the sophomore movie from the firm.

“Sincerely, Daisy is an urban Kenyan story about family, young love, timeless friendships and the reality of tough economic times. It’s the coming-of-age story in the eyes of a Kenyan girl,” Nick tells Lifestyle.

Nick is no stranger to the TV and film space, having successfully established himself as a pan-African actor, TV host, corporate emcee and all-round creative. He is also one of the producers of The Next Superstar.

After completing his studies in film production at the University of California, Los Angeles (UCLA) he founded Giraffe Africa Productions with a desire to put his ideas into action by championing the movement towards telling youthful urban stories from Kenya to the world.

“This film is very special because it was born out of a talent competition. It’s a big deal to us because most of the cast are all new faces. We have older faces on it as well. We wanted to push the fact that we’re putting young and new faces on the map,” says Nick.

The production for the film started in November 2019.

“It was shot in seven days, which is a very short time for a feature film. But we had a very dedicated cast and crew, which made it possible to have what we were looking for in those few days,” he said.

But all along, the team had no idea of what was waiting in store for them.

“Originally, the film was only to do a cinema run. But when the Covid-19 pandemic hit the world, there was an increased demand for content. It’s ironic, but we have Covid-19 to thank for the Netflix deal,” explains Nick.

He adds: “I honestly feel like we were at the right place at the right time because we had just finished the project in March when my mentor, Tosh, reached out to me and said there was a Netflix distributor looking for East African content because it’s been especially missing on the platform. We submitted our film, which they liked. The rest, as they say, is history.”

With platforms as big as Netflix, there’s a lot of detail involved. Netflix had to watch the film and Nick’s team had to make a couple of adjustments to it.

“We started the conversation as early as March, and with a lot of back and forth, we finally inked the deal in July. We couldn’t believe it. I’m especially elated that the film is going to be on one of the world’s biggest on-demand platforms,” Nick says, beaming.

“Another reason for our excitement is that we have a strong female lead, Ella Maina, whose breakout role was on NTV’s Trap House.”

Sincerely Daisy has a cast of 10 actors including Mbeki Mwalimu, who stars in Selina; Sam Psenjen,  who has been on Sue na Jonnie; Jackie Matubia, famously known for her role as Jolene on Tahidi High; and Muthoni Gathecha,  who has starred in several local and international productions including Kona and Pray & Prey.

The new faces include Foi Wambui, a well-known YouTuber, presenter and actress; and Brian Abajah who has been part of several short films, most notably Men-sturation.

There is also Faiz Ouma, who is popular in theatrical plays. Another actor is James Webbo, a lawyer, who has starred in numerous television and theatre productions. Serah Wanjiru, who was part of The Next Superstar, made her feature film debut on Sincerely Daisy.

As Nick explained, the best part about the whole project was how quickly it all came together, and how everybody was 100 per cent committed to making the film the best possible version it could be.

There was a sense of unity and togetherness — almost as if they were making the film for Netflix, and only that they didn’t know it yet.

But nothing ever comes on a silver platter, according to Nick, who explains the main challenges in Kenya’s film industry.

“There’s a lot that we’re trying to overcome in the industry, the main one being budgetary constraints. The way we look at it is that it cannot be our limitation because we have to grow the industry. We always look to make the most of what we have,” he says.

The actor, producer and director worked with a crew of three for the success of the film: Kevin Davies, Natasha Likimani and Roy Mutonga.

Kevin boasts over 13 years of experience working in narrative films, animation and the TV commercial space. His portfolio includes working with independent films to brands like Toyota, AirBnB and Coca-Cola.

Natasha has over 10 years of experience in screenwriting and directing. Her first film, Veve, received seven nominations in the 2015 Kalasha Awards and is listed as the first Kenyan film available for streaming on Netflix. In 2013, she became the first Kenyan writer to be nominated for an International Emmy Award for her work in Jongo Love.

Roy has worked on a vast array of local and international projects as a video editor and post-production supervisor, including Giraffe Africa’s Productions debut film You Again.

“I’ve been fortunate to be a part of really cool projects not only in Kenya but also across the continent. What has always challenged me is the fact that Africa has never been properly introduced to Kenya through our stories,” he said.

For Nick, this is just the beginning of Kenya’s story. He hopes that Sincerely, Daisy will open other doors for other filmmakers to be able to get their content on big platforms such as Netflix.

“The idea is for us to have a sustainable film industry that people can now make a living off. Things are changing and times are changing. For the first time, it looks like people will be able to make a living from film as a career.

“I’m looking forward to a time where people in the industry will not be asked what else they do to earn a living,” he says.

Sincerely Daisy has a strong female character in a starring role and according to Nick, there is a deeper message behind that.

“A strong female lead has always been much more than just a character in a film. She has the power to positively impact an entire generation of young minds. She has the ability to challenge stereotypes like those that associate strength to being masculine. Female representation in movies that portray strong female leads can shape the worldview of women in society,” he says.

“Young girls need powerful role models to look up to; women who can stand up for themselves and the people they love, women who chase after their dreams and are unapologetic about it, women who thrive in a male-dominated world. Why should a girl in 2020 have to wait for her hero to save the day when she can be her own hero?” Poses Nick.

“Film is a multibillion-dollar industry. In Nigeria, film contributes significantly to the country’s GDP and has created jobs for hundreds of thousands of people. It’s time that we moved away from traditional investments and pumped in money to the creative industries,” he says.