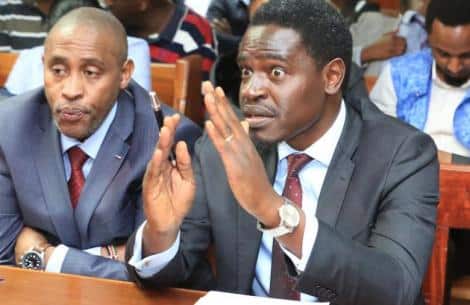 Law Society of Kenya President Nelson Havi has broken his silence days after he was accused of being involved in a love triangle with some members of the society.

In a statement seen by Kenyans.co.ke on Saturday, September 12, Nelson Havi criticised Daily Nation for running the story on its August 30 edition.

The story claimed that two women were seeking the attention of the LSK president but he was fond of only one of them, leaving the other feeling dejected.

“It got worse after the man failed to attend a crucial meeting to avoid drama, stirring fears that his messy personal conduct is affecting the organisation,” the story titled Love Triangle Gone Awry claimed.

“Could you consider an apology for the Love Triangle Gone Awry article which has for the last two weeks formed good fodder for unnecessary attacks on my person, profession, office, family, friends and clients?” the statement from the LSK president stated.

Havi also accused journalists at the media house of colluding with his rivals to damage his reputation in an article to be published in the Sunday Nation of September 13.

The advocate addressed reports that he absconded the induction of new LSK members in Naivasha in fear of the alleged love triangle spiraling out of control.

“I had purposed to attend and was scheduled to depart for Naivasha with the rest of the council members on the evening of August 27, 2020 after a whole day of activity in commemoration of Katiba Day.

“However, my client Daniel Manduku was summoned to appear before the Director of Criminal Investigations that afternoon for plea taking the following morning,” Havi explained his absence.

He asked his critics to learn to discern the difference between his role as an advocate and as the LSK president.

“There are some who, for lack of better learning or from the heat of hatred have a blurred perception of the clear distinction,” the lawyer slammed his rivals.

He added that a majority of LSK members and Kenyans, in general, were happy with his service since he was elected in February 2020.

Photos:Bravo Alfred Mutua,thinking of security and doing something about it