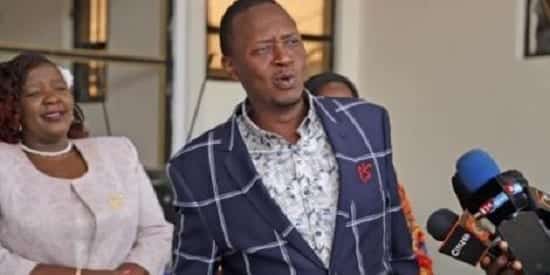 Gitonga, whose striking resemblance to the president amazed many Kenyans, will use the vehicle to start his own taxi business.

Previously, he owned a bar but was forced to close it in line with the Covid-19 guidelines directed by the president.

“Fellow Kenyans, the day has finally come,” an excited Gitonga wrote on his social media pages.

Speaking to Kenyans.co.ke, comedian Herman Kago, popularly known to many as Professor Hamo stated that Gitonga was being mentored into the business by a team of experts.

“He has been a businessman for a long time but has never dealt with the taxi business so he will have people to guide him through the process,” the comedian stated.

“In fact, the first time when photos of him in a vehicle were shared online, he had just come to train as well as look for a vehicle that best suited him,” he added.

A photo of Gitonga in a Lexus LX570 2016 surfaced online on Thursday, August 13, and many speculated that he had been gifted the vehicle.

He, however, denied the allegations and asked those who were spreading the rumors to stop.

Gitonga came to the limelight after his photos were shared widely on social media with some people speculating they were old pictures of the commander-in-chief, probably before his first term as president in 2013.

“Sometimes, I meet people who tell me that they have not had anything to eat and being ‘Uhunye’, I have to give them some money. In fact, that name has really made me suffer,” he stated.

Video:The making of a saint – LIVE