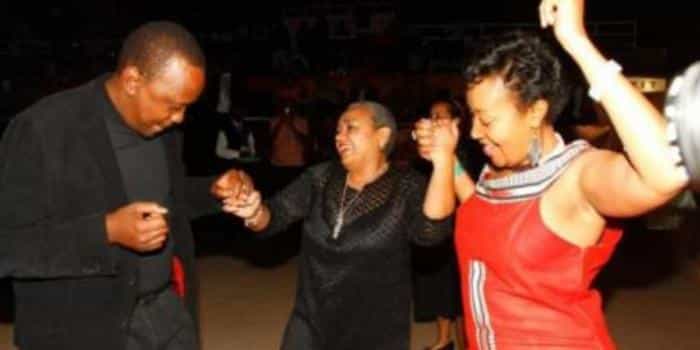 President Uhuru Kenyatta has on several occasions disregarded his presidential title in exchange for a dance.

Without a second thought and often in the spur of the moment, his security is often left trying to figure out how to assure his safety, as the head of state joins a dance party.

Here are five instances where he has been recorded to have broken protocol for a dance while carrying out his presidential duties.

1. Nobody Could Stop Reggae

Prior to the banning of public events due to the Covid-19 pandemic, President Uhuru Kenyatta was spotted at a UB40 concert at Carnivore Gardens in Nairobi in February 2020.

The Head of State together with Citizen TV journalist, Jeff Koinange and ODM leader Raila Odinga sang and danced as they celebrated reggae band performing their hit songs.

The two leaders took to the stage, where they went on to show off their dance moves, sending the crowd into a frenzy.

Uhuru is a lover of reggae music as he once confessed in an interview on Churchill Show.

“I am stuck in a certain age, my favorite musicians are UB40, Bob Marley and Gregory Isaacs.” he disclosed.

2. Sneaking out for Dance

In 2015, Uhuru strolled out of State House and made an impromptu visit to the Permanent Presidential Music Commission offices, where choirs were rehearsing to entertain then US President Barack Obama in 2015.

Together with his son Muhoho Kenyatta and a security detail of about 20 men in tow, the unconventionial walk led the president to the sweet melodies.

His apperance at the rehearsals left the members of the choir in a frenzy.

Dressed in unusual casual attire, the President danced, sang and mingled with the artists as he gave them handshakes.

3. Not to be outdone by President Obama

While perfomring their hit song, Sura Yako, the band members picked First Lady Margaret Kenyatta from the VIP table and directed her on to the dance floor.

At the same time, President Barrack Obama and Uhuru Kenyatta also got up from their seats and moved to the dance floor where they showed their moves.

4. Dabbing for the ballot

Prior to the 2017 elections, Uhuru engaged in every relatable activity to appeal to the masses for votes. On one occassion he chose to dance.

With a dance group at State House, Uhuru tried to pull off some dance styles that were popular with the young generation at the time including a dab.

His moves may have not been as smooth as the dancers but he did try to blend in with the crew keeping up with their choreography.

That was the first time in Kenya’s history that a president had perfomed a choreographed set with professional dancers at State House.

In July 2019, President Uhuru Kenyatta was the chief guest at the Akorino Annual conference that was held in Kasarani.

During the conference, the president did not mince his words against rebels who were opposing him, in an outburst that sent shockwaves across the country.

Prior to that, he joined the worshippers for a dance when he was hauled to the centre of the podium. The akorino surrounded him as they strecthed to hold him during the dance.

His security had a difficult time controlling the crowd as more and more people joined. All through the president appeared to enjoy himself.

At the same time, one of his sons, whom the president failed to mention his name, sneaked out of the house in Mombasa at night and went out to have fun, oblivious of the risk he was posing to the other family members including Mama Ngina Kenyatta who is aged 86.

Uhuru shared the story of his son explaining how some of the youth were disregardig government’s directives aimed at curbing the spread of the virus arguing that they were putting the lives of the elderly at risk.

44 and 21:We’re not bothered by the age difference

Sonko clashes with Tobiko over protocol hitch at Uhuru’s function