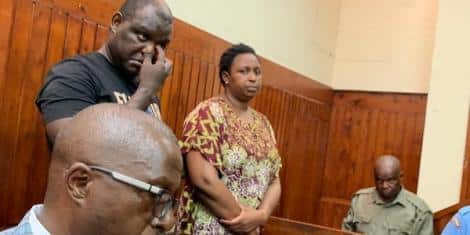 Malindi MP Aisha Jumwa is set to spend three nights in police custody after a ruling from a Mombasa Court on Monday, October 19.

Judge Njoki Mwangi ruled that Jumwa will be remanded, pending plea taking on Thursday, October 22 in a murder case.

“The two accused persons shall be remanded at port police station pending psychiatric examination. Pre-bail assessment shall be undertaken on each of the accused.

“Accused to be escorted to Coast General on 21st Oct for psychiatric examination,” noted Mwangi.

In October 2019, the outspoken lawmaker was linked to a fatal shooting after chaos erupted during campaigns in Ganda Ward, Kilifi County.

Jumwa and his co-accused, Geoffrey Okuto Otieno, who was his bodyguard at the time will be expected to take plea in a murder case.

The Judge ruled that despite Jumwa being entitled to bail pending trial over alleged misappropriation of Constituency Development Funds (CDF) amounting to Ksh.19 million, the considerations were different.

The bail terms under which they had been released did not apply to the murder charges levelled against the legislator.

According to reports, Jumwa at the time stormed a venue where a meeting was being held and in the scuffle that ensued, an ODM agent got shot and died.

The meeting was convened for ODM agents to strategise on how they would conduct the mini-poll.

In her response over the incident, Jumwa pointed her finger towards ODM Party claiming that it had played a role in the death of the agent.

This comes after the Director of Public Prosecutions (DPP), on Wednesday, October 14, approved murder charges against Jumwa.

Single? Must Read,Hilarious-Application To Marry My Daughter