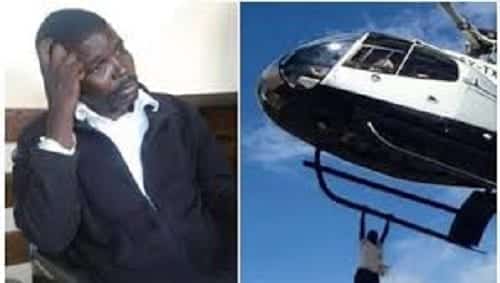 The heroic Kenyan man from Bungoma who gained national fame for hanging on a flying chopper has died. The family confirmed that  Saleh Wanjala died shortly after he was admitted to the medical facility and his body taken to Bungoma County Referral Hospital mortuary.

Saleh Wanjala who was popularly known as James Bond was found unconscious in his house before being  taken to the hospital where he later died.

Wanjala made a name for himself in May 2016 by hanging on a chopper that was ferrying the body of slain businessman the late Jacob Juma as it flew away from Bungoma’s Posta grounds.

After  hanging onto the helicopter up to Bungoma Airstrip, Saleh Wanjala jumped off before the chopper landed and for this  dare-devil stunt, Kenyans likened him to the famous British film actor ‘James Bond’ hence the nickname. He was however arrested and charged for endangering his life but later released.

For his dare-devil stunt, a local businessman, Joseph Waswa fulfilled Wanjala’s dreams of flying and purchased tickets for him and 11 members of his family, including his wife and mother and brought them to Nairobi on a Kenya Airways flight.

Wanjala described his experience on the flight as amazing, saying that it was a dream come true for him and that he would give anything to have the experience again.

According to some newspaper report, Saleh Wanjala’s  neighbour a John Wekesa said that the deceased has was living a lonely life at his Mashambani Estate and was addicted to alcohol and in most cases he would prefer using the little money he got from well-wishers to buy ‘changaa’ instead of food.

Wanjala had no wife and he was living alone in a rented house where he was found lying on the floor and unconscious. The neighbors later rushed him to Bungoma County Referral Hospital where  he died few hours later.

Remembering Bungoma ‘James Bond’? He talks of misfortunes since the incident