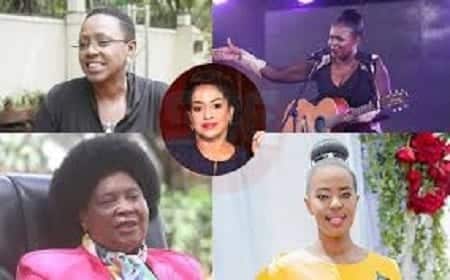 Some of our favourite celebrities have also joined the bandwagon proving that love really does conquer all, at least for most of them.

Here are some Kenyan celebrities who have been married as second wives:

This beautiful Nairobi Woman Rep elect is the mum to Makena Maria and Lefteris Ngugi, children she had from her marriage to renowned co­ffee farmer and Kenya Nut Company billionaire Pius Mbugua Ngugi.

During a TV interview, Passaris shocked many when she revealed that she was the second wife in a polygamous setup.

Alfred Mutua was initially married to Josephine Thitu Maundu before they broke up.

The Machakos governor then moved on with the beautiful Lillian Nganga

Mary Wambui is a Kenyan businesswoman and politician. She succeeded former president Mwai Kibaki as Member of Parliament for Othaya. She is allegedly Kibaki’s second wife.

The Wambui family claim that Mwai married Mary in 1972 under Kikuyu customary law and they have a daughter, Wangui Mwai.

In 2009, Kibaki held a press conference to ‘clear the air’ and inform the world that he only has one wife

The fair and comely lawmaker who emerged victorious for the second term in the concluded General Election is said to have won the heart of Gathitu Maina, the former Kenya Dairy Board boss.