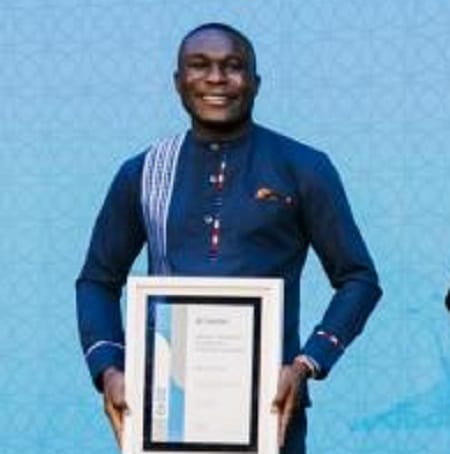 A Kenyan journalist attached to a UK media house was the only scribe from East Africa to bag an award at the Sanlam Awards for Excellence in Financial Journalism.

The reporter, Donald Magomere, was named as the Newcomer of the Year alongside Thando Maeko of Mail and Guardian in an exclusive dinner in South Africa on Friday, November 13.

Magomere, who works as a reporter for the Financial Times, won the award after having demonstrated a vibrancy and poignancy in their storytelling on various topics on the economy.

The Sanlam Awards for Excellence in Financial Journalism took place at a socially-distanced gathering at Capital on the Park in Sandton, Johannesburg following several months of planning amidst the pandemic.

Entrants drawn from various media houses across the world were subjected to Covid-19 tests before travelling to the South African City where they were also put and fully sponsored trip across Johannesburg.

Sanlam, the annual awards, carry a total prize purse of more than Ksh2 million (about USD 20 000) for the 12 categories. They have recognised and celebrated excellence in financial journalism since 1974.

At the gala, Financial Mail journalist Claire Bisseker was named Sanlam Financial Journalist of the Year 2019.

“A vibrant society needs strong media. In Africa, financial journalists have a profound impact in keeping us informed, helping to uncover corruption, tell our strong growth stories and act as a watchdog for companies, government, markets and economy.

“Against a background of change within their own industry, we commend the outstanding work these professionals do and look forward to continuing our support of the industry,” he stated.

This year, a total of 113 entries were received for the awards, which were established by Sanlam 45 years ago in a bid to recognise and reward exceptional financial journalism. The work judged was all produced in 2019, before the COVID-19 pandemic, and spans the African continent.

In 2017, Standard Group business writer Dominic Omondi bagged the Sanlam Award for Excellence in Financial Journalism walking away with Ksh200,000.