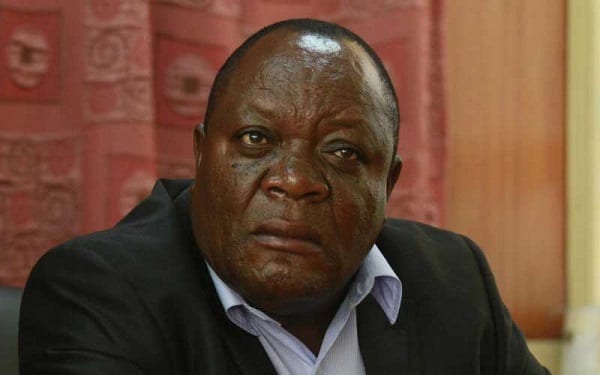 Funeral plans for Matungu MP Justus Murunga have been thrown into disarray after a Nairobi court stopped his two wives from burying him.

Milimani Principal Magistrate A.N Makau issued the order restraining Murunga ‘s widows Chistabel Murunga and Grace Murunga from conducting the burial, interment or cremation of the body pending the determination of a suit filed by a woman claiming to have been his lover.

“A temporary injunction is hereby issued restraining the two wives whether by themselves or their relatives from conducting the burial of the deceased or disposing of the body in any manner pending determination of the suit,” ruled Makau.

The suit was filed by Agnes Wangui claiming that they have two children out of their secret relationship with the late MP but his family have conspired to lock her and the minors out of the funeral and burial arrangements.

Wangui avers that she met Murunga in 2012 when he was a supervisor at Embakasi Ranching while she was a businesswoman selling beverages and snacks within Ruai area.

“Shortly after, we began a romantic relationship and out of the union we were blessed with two children. The firstborn was born in March 2013 while our second child was born in November 2017,” swore Wangui.

She stated that since Murunga had informed him that he lived with his wife in Utawala Estate, he rented for her a house in Ruai where they stayed with her children.

Wangui swore that the MP used to cater for their monthly rent and upkeep but their relationship started hitting rock bottom in September 2017 after he won the Matungu parliamentary seat.

“He never wanted neither the public nor his family to learn the existence of our two children and even denied me his identification card to secure their birth certificates. However, after several talks and mutual agreement, he resumed supporting his children until his death,” swore Wangui.

She stated that the minors are Murunga’s biological children which he always acknowledged and supported before his death on November 14.

According to Wangui, she fears that the MP’s family will deny her and her children a chance to participate in his funeral unless the court intervenes to protect their rights.

Her lawyer Danstan Omari asked the court to order for a collection of DNA samples from the deceased and the minors for comparison and to ascertain their paternity, and that the two children be at liberty to fully participate in the funeral arrangements of their biological father/.

In the alternative, Omari asked the court to order Lee Funeral Home to preserve Murunga’s remains until licensed pathologists appointed by both parties take samples for the DNA tests.

Omari submitted that the MP at all times acknowledged the existence of Wangui and their two children but since he had never formally introduced them to his family, they will be locked out and denied the opportunity to pay their last respects.

The magistrate directed him to serve Murunga’s widows with the application for them to respond before the hearing on November 26.