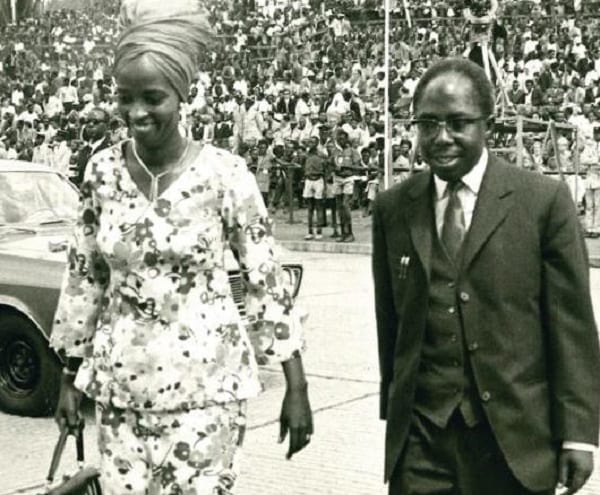 Dr Julius Gikonyo Kiano was the first Kenyan to earn a  PhD, he was an intelligent, young African scholar at the University of California at Berkeley. Kiano first dated Coretta Scott, the future wife of Dr Martin Luther King Jr. But the two went separate ways after five years since Gikonyo was “too bright” and “too political” and would return to his country after graduation, according to Dorothy Stephens in her 2006 memoir, Kwa Heri Means Goodbye: Memories of Kenya 1957-1959.

Dr Kiano later settled for Ernestine Hammond, an African American public health nurse in a marriage that would test the limits of patriarchy against feminism. Kenya at independence was fighting three enemies: poverty, ignorance and disease.

Over 50 year later, those enemies still stand. But there is a fourth enemy — unemployment. Just imagine  despite his PhD, Dr Kiano wouldn’t get a job. Ernestine wouldn’t understand why a PhD holder was working as a petrol station attendant at Esso!

When he finally became the first African Kenyan lecturer at Royal Technical College, today the University of Nairobi, the couple would quarrel endlessly over Dr Kiano’s many relatives. Ernestine was coming face to face with ‘African Socialism.’ After all, Dr Kiano’s air ticket was sourced through a village harambee!

The Kianos quickly sired four kids. Ernestine even renounced her American citizenship in 1964. But there was no school for black Africans. Dr Kiano and other elite Africans at Royal Technical College founded Hospital Hill Primary school for their children.

Dr Kiano shortly got engrossed in the Kennedy Air Lifts, a scholarship programme to America where it was funded by among others, President John F Kennedy’s family. These graduates would later play a crucial role as technocrats who galloped Kenya’s economy in the first decades of independence.

Before the Kennedy airlifts, most of the top Kenyan students attended Makerere University College in Uganda. This group included retired President Mwai Kibaki and opposition leader the late Jaramogi Oginga Odinga, which explains why they never returned with mzungu wives!

Some airlift beneficiaries were even helped to fill in forms in the sitting room of the Kianos. One boy, George Kinuthia, went on attain a PhD in algebra. He later became Kenya’s vice president, Prof George Saitoti, who died in a plane crash in 2008.

Ruth Njiiri widowed in 1975
Dr Kiano was helped out by nationalist Tom Mboya and Kariuki Njiiri in sorting out the scholarships.
Njiiri had attended Lincoln University where fellow students included later presidents Nnamdi Azikiwe of Nigeria and Kwame Nkrumah of Ghana. Njiiri returned  with an African-American wife, Ruth Stutts Njiiri in 1958.

During a 2005 interview, Ruth recounted how new foreign wives were settling down: “The first place we lived was with Duncan Ndegwa who had a flat in Parklands near the Hospital Hill School before we moved to Nairobi West. While in Nairobi West, my husband built a house in Riruta near Dr Gikonyo Kiano and Mareka Gecaga. That was where we eventually lived while in Kenya.”

Kariuki Njiiri after whose father Njiiri School in Murang’a is named, later gave up his (Fort Hall) Murang’a seat in the Legco for Jomo Kenyatta, allowing him to attend the Lancaster II Constitutional conference that paved the way for Kenya’s independence.

Ruth also helped in the Kennedy airlifts before being widowed when Njiiri died in a road accident in 1975.
In the 2005 interview,  Ruth  explained that she accompanied Kenyan students and helped them settle in the US.

One beneficiary, Pamela Odede got married Tom Mboya — a friend of the Kianos — and became Pamela Mboya. Indeed, it was in Kiano’s sitting room where Mboya and Kiano played with colours to create our current national flag colours!

Ernestine anger issues led to deportation
Ruth and Ernestine, being African-Americans were very close, but with dissimilar temperaments. Ernestine had anger management issues aggravated by her feminist streak.

She had open disdain for social restrictions and her conduct that was judged ‘unseemly’ for a politician’s wife. Like having  no qualms throwing her stilettos at Dr Kiano during drinking sessions at the United Kenya Club,  which was among the first to admit elite Africans.

Her dramas became common fodder but when she pulled her tantrums in the presence of founding President Kenyatta, she found herself at the then Nairobi International Airport on a one-way ticket back to America.

PHOTOS: Drama As Moses Wetangula’s Convoy Is Teargassed in Bungoma