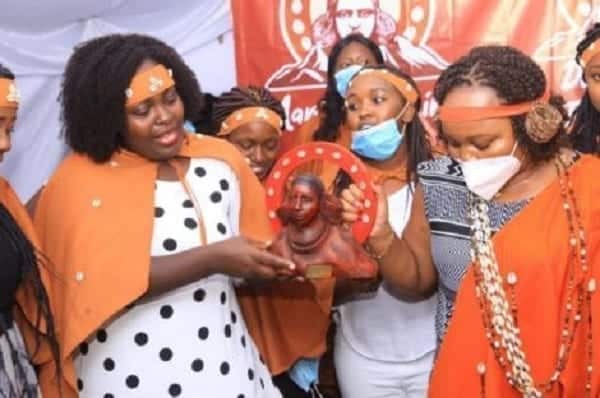 Kirinyaga governor Anne Waiguru was on Thursday, December 10, bestowed an honour to patronise a women empowerment group based in the Mount Kenya region.

The county head was made the Chief Patron of the Daughters of the Mountain where she committed to support and mentor the women in the organisation.

“I commit to supporting the network, mentor and handhold the young women to enable them to contribute positively towards the social, economic and political advancement of our region,” she stated.

Waiguru, who is one of two female governors in Kenya has been a champion for women empowerment in the country.

“It’s my belief, that as women leaders, when we shatter the glass ceiling, we must make room for those who come after us and create a chain reaction that empowers subsequent generations of girls and women,” she added.

In politics, she survived an impeachment attempt in the Senate and has been in the frontlines of supporting the Building Bridges Initiative (BBI) in her region.

In a previous address, she urged Kenyans and particularly the Mt. Kenya Region not to allow the ongoing debate on BBI to divide them.

She stated that the BBI was aimed at uniting Kenyans and politics should not derail the set objective.

“The most important thing is maintaining peace in the country even as different people and groups lobby to have their interests incorporated in the constitutional amendment,” the governor stated.

In a previous address, the Kirinyaga governor called for the pushed of gender inclusion in the BBI proposals as well as equitable distribution of resources.

“The situation we have had recently, like the process of finding a revenue-sharing formula and stalemate experienced, shouldn’t happen because people who end up suffering as we have seen lately are women.

“They are the ones at the forefront of caregiving in terms of health but also the ones who need it the most, especially prenatal and postnatal. Those were the issues we were discussing,” she stated.

Word of the Day:Your Sun and Shield

Video:The CORD Opposition is also to blame for Insecurity

I was not paid Sh192 million by NYS – Mutahi Ngunyi