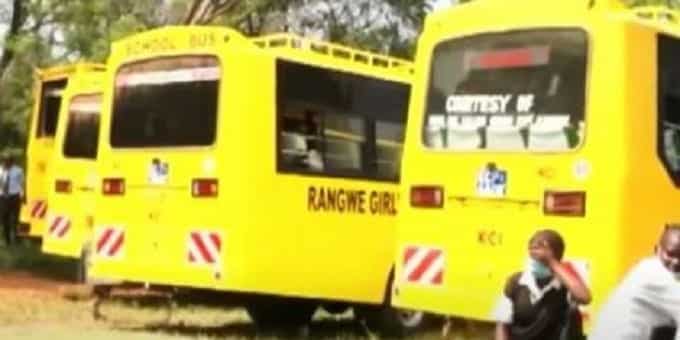 The buses which are to serve several schools in Rangwe constituency were launched by the area MP Dr. Lilian Gogo who noted that most girls living in remote areas have not reported back to school.

The Director of Education in the constituency observed that since the schools reopened, only 75 percent of the students had returned to class with the rest believed to be girls who were impregnated and opted to stay home.

The transport initiative is part of a plan to encourage school girls to go back to school after delivering their babies.

“I plead with parents whose girls are pregnant, please allow them back in school so that they can continue with their education,” she stated.

Shock as Shamba Boy Defile and Impregnates 3 Sisters With…

She noted that there was no shame in the pregnancies adding that the school transport will ensure that the students are safe.

With the prolonged closing of schools due to the Covid-19 pandemic, the vehicles were kept at Rangwe Police Station for safekeeping.

Despite the government directing all children to go back to school, students that had given birth did not have caregivers to take care of their babies, posing an added challenge to schools, administrators and parents.

Ndhiwa MP Martin Owino advocated that the government considers the provision of daycare services for babies whose mothers were required back to school.

Speaking at Ongaku Secondary school on January 12, Owino said that some of the teenage mothers were from underprivileged backgrounds with parents struggling to make a living, hence the need for the government and the county to intervene to ensure they go back to school.