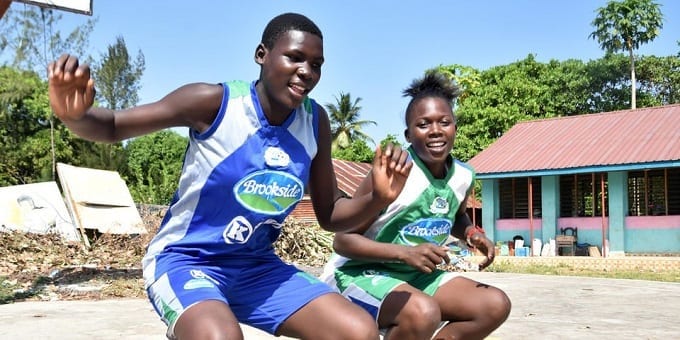 Okot, 6’5, a Form Three student and Aranda, 6’1, a Form Two student impressed the  American scouts during the Tusk under-17 basketball tials at YMCA in Nairobi.

“I have been excited to help some of these kids to come to the US and change their lives forever”, Inmon said.

According to him, they have been taking Kenyan girls before and ensuring they place them into good universities on full scholarships after high school.

But Kaya Tiwi High school principal Robert Aran, while congratulating students for the major feat, however said that he would want them to complete their studies in Kenya before moving abroad.

“As a principal, I want to say that am very happy that my students have the talents to attract scouts from the US schools and colleges, but I feel it is not the right time. They are bright students who have been posting good grades, the reason I would want them to go after they are done with studies,” Aran, who as principal at Shimba Hills Secondary also in Kwale, had 12 of his former basketball female students land scholarships to study and play basketball in American colleges said.

According to Aran, both Okot and Aranda have hardly played the games of basketball for a year, the reason he thinks they should be given some time to mature in the game and also as Kenya citizens.

“My stand is very clear that they should complete their secondary education and that is the position of their parents too, but I will consult with relevant education ministry officials and come up with a proper decision,” he added.

Word of the Day:Change your Words

Isaac Rutto is corrupt, don’t include him in your Cabinet