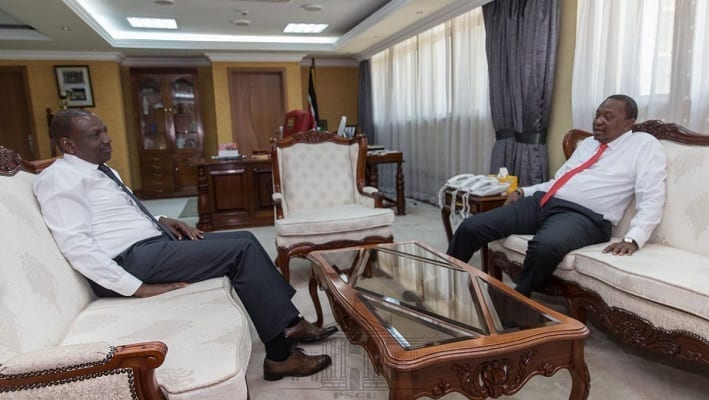 President Uhuru Kenyatta and his deputy William Ruto met at State House, Nairobi, on Thursday, February 25, a few days after the former dared the latter to resign.

The two attended a Cabinet meeting chaired by Kenyatta. Ruto has missed out on a number of past cabinet meetings.

An insider privy to the meeting at State House disclosed that the DP arrived earlier, and was sitting at the high table alongside Uhuru. Issues regarding the development agenda and the Building Bridges Initiative (BBI) were reported to have been given top priority.

This comes after Uhuru dared Ruto on Friday, February 12, together with his allies to resign instead of criticising the government and the Jubilee Party.

The President appeared to accuse the DP of being a hypocrite, and that all he wanted was to enjoy the successes of the government he was castigating.

“We need to either work together or not. If they feel that the government is favourable to them, then they should work with us but if they disassociate themselves, then let them resign,” the president stated.

Ruto would later on hit back at Uhuru, and said that he would not resign. He added that he had sacrificed to get Kenyatta into power and no one would push him to quit the DP role.

The Jubilee Deputy Party leader added that Kenyatta had left him (Ruto) so as to be with thieves. He also lamented that the police force was being used to frustrate his allies.

“There are people plotting to push me out of the Jubilee government. I’d like to ask when seeking leadership on Jubilee party, was Uhuru with me or with the thieves he’s currently with?” asked Ruto

In a subsequent meeting, a few days after Uhuru reshuffled government, the Head of State asked DP allies in Cabinet and other public offices to quit. Reports alleged that he would also crackdown on the DP’s sympathisers in government.

The wrangles between Ruto and Uhuru played out in the BBI push, with the DP fighting tooth and nail against the bill. Over 40 county assemblies have since passed the BBI Bill.