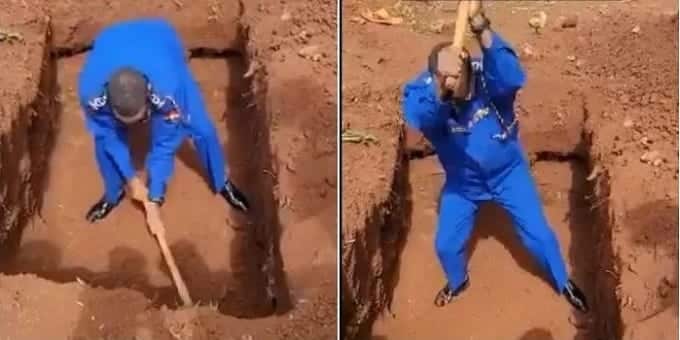 Nairobi Regional Commander Yakub Rashid has touched the hearts of many Kenyans in the wake of Garissa Senator Yusuf Haji’s death.

Rashid was captured digging the late senator’s grave at the Lang’ata Muslim Cemetery where he will be laid to rest according to Muslim traditions.

The video showing him at work dressed in his official police uniform was shared multiple times on social media, earning himself praise.

Yakub has a history of kind acts one of the most notable being in 2020, when he was moved by a woman and her two children who had made the most pitiful effort to protect themselves against the Covid-19 virus.

The family had repurposed plastic bottles into facemasks. Touched by the plight of the three who stood out in the most unenviable way, the commander bought new facemasks for each of them and personally showed them how to wear them.

In the Muslim traditions, the whole community always participates in a funeral, and thus, it’s not unusual for one to attend the funeral of individuals they don’t know well.

The body of the late politician was taken to South C Mosque for a brief ceremony before being interred at Lang’ata Muslim Cemetery.

At South C mosque, Muslim faithful performed Janazah,(Ṣalāt al-Janāzah) a prayer performed in congregation to seek pardon for the deceased and all dead Muslims.

President Uhuru Kenyatta flew in for the funeral after attending the late Simeon Nyachae’s burial in Kisii earlier during the day.

Nairobi Metropolitan Services Major General Mohammed Badi, among other leaders, was also present at the funeral.

Up to 2020, Haji served as the chairman of the Building Bridges Initiative (BBI) task force.

He previously served the government in various capacities including Defence and Interior Ministries.

He is the father of the Director of Public Prosecutions (DPP) Noordin Haji.