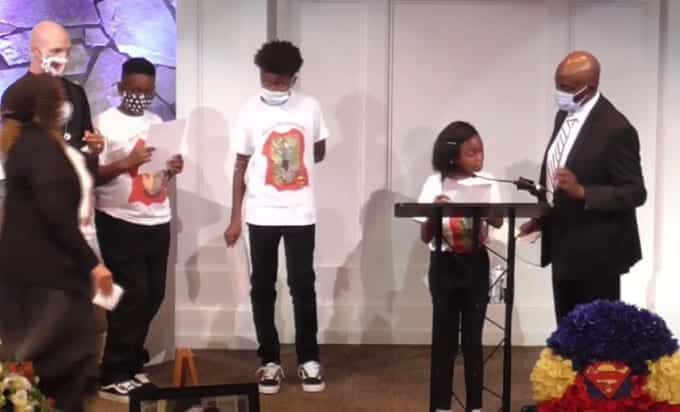 It is with deep sorrow that we announce the death of Xavien Kimani Perez of Raleigh, North Carolina, who passed away on February 15, 2021, at the age of 11.

Xavien Kimani Perez aka: Zay Zay was born in Raleigh, NC on November 27th, 2009. He attended school at Combs Elementary School where he was greatly loved by his teachers and peers. On February 15th, Xavien gained his angelic wings after receiving treatment at Wakemed Hospital due to a bike accident at the lake. Two days later, he became the hero he always wanted to be by saving the lives of 7 other children.

Xavien will be dearly missed by so many for innumerable reasons, but he was especially loved by all of his family. He was a beloved son not only to his mom, Jessica, but also to his close knit community of adopted and God parents that all helped to support and raise him. He was a cherished brother to Mikey, Brooklyn, Conrad, Franklin, and Mara.

He will be greatly missed because of his kindness to others, ever-present curiosity, sense of adventure, enthusiasm, and wonderful sense of humor. Our little hero will live on and be remembered by his mom, dads, brothers, sisters, friends, and everyone else that was lucky enough to be touched by his story. Xavien “Kimani” always has been and now truly is his Mommy’s little angel.

“On Monday, February 8th, Xavien was in a biking accident at the lake. He went to the emergency room and was diagnosed with a broken wrist and concussion. Shortly after, it was determined he had a brain injury. He was then rushed back for an emergency cranial surgery to stop the bleeding from his brain.

His surgery was successful and he was in critical condition in the ICU. The next 48-72 hours were critical because that is when they expected the swelling in his brain to peak, he was still not breathing on his own at this point. Within a few days, they were able to turn down his sedation and remove him from the ventilator.

Things then took a turn. A few days ago, Xavien was rushed back for another emergency surgery to relieve the pressure in his brain after his scan showed additional swelling. At this point, his pupils were not responding and an MRI revealed there was no brain activity for sweet Xavien.

During this time, Jessica, Xavien’s mother, has not left his side. She has incurred medical expenses, funeral and burial expenses and has lost wages as she is a mother of two other children, Brooklyn and Mikey. Jessica has made the absolute, most difficult, decision that no mother should have to make.

She has decided for Xavien to be an organ donor. He will be giving the gift of life to at least seven other children. Please consider donating if able, if you are not please share this. Above all, keep lifting this family in your thoughts and prayers as peace is hard to find in times like these.

Video by Marked by Grace Productions

Kevin Manyara: From Kenya to the football field in America