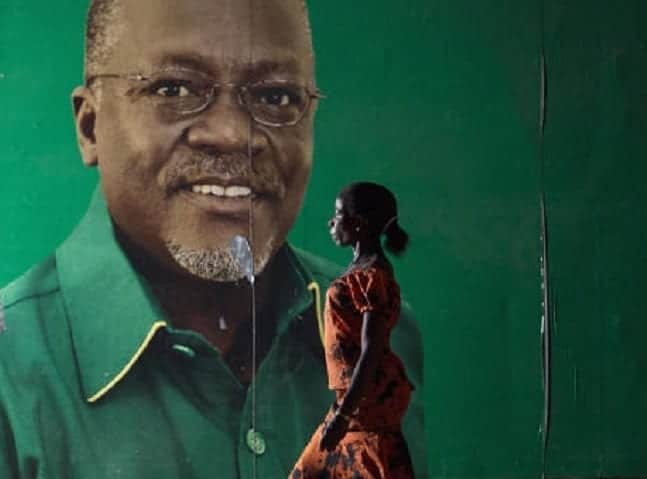 Since the Covid-19 pandemic hit the world, Tanzania’s John Pombe Magufuli always maintained the disease was not in the country. He urged residents to ignore directives from the World Health Organization (WHO) on how to protect themselves against the virus and instead asked them to pray against it.

The Chemistry teacher went ahead to pick on other countries for imposing lockdowns and other measures in place to contain the virus. Even during his campaigns for a second term in office, when the virus was at its peak, Magufuli and his CCM party did not adhere to protocols set by WHO. When the vaccine for the virus was developed, Magufuli urged his residents to pray, rely on steam and other traditional means to fight it. “You should stand firm. Vaccinations are dangerous,” he was quoted saying.

However, in a change of heart on February 21, 2021, while attending a Church service in Dar es Salaam, he acknowledged the virus and its dangers. “Tanzanians should take caution and use masks made in the country including those of the country’s medical board because there is doubt about the efficacy of masks from other countries,” he told the congregation.

This is perhaps what most people remember Magufuli for. According to the BBC, the Chama Cha Mapinduzi party (CCM), while campaigning in 2015 for what would be Magufuli’s first term in office, promised to reverse the policy that bans pregnant school girls from resuming studies. A 2002 regulation terms the matter “offense against morality” which has seen the mandatory testing for pregnancy for school-going girls and their expulsion if found pregnant as per the law. “No one with a child from Class One to secondary school will be allowed back to school. If they chose to rear children, let them stick to that,” Magufuli told a rally in Chilanze town. The move by Magufuli saw his country lose a Sh33 billion education loan from the World Bank with the bank demanding a change of the policy.

In July 2020 Magufuli hit the headlines when he banned Kenya’s national carrier Kenya Airways (KQ) from flying into Tanzania. The move followed Kenya’s decision not to include Tanzania into a list of countries that would enter Kenya after the then Covid-19 restrictions were removed. Days later Kenya’s Transport CS James Macharia expanded the list of countries whose citizens were allowed entry into Kenya without the mandatory 14-day quarantine and Tanzania was, again, missing from the list. In a statement at the time, the Tanzanian Civil Aviation Authority (TCAA) said: “This also rescinds our previous arrangements that permit KQ flights into the Republic of Tanzania.” In a circular, TCAA, on August 25, 2020 added AirKenya Express, Fly540 and Safarilink Aviation to the list of airlines banned from flying into the country bringing the total of Kenyan airlines banned from the country to four.

In a crackdown over illegal imports into the country, in November 2017, the Magufuli government destroyed chicks worth Sh12.5million from Kenya over bird flu fears. The 6,400 chicks had been impounded at the Namanga border on October 31, 2017. The destruction of the consignment was in line with a government ban that was introduced in 2007 over the importation of chicks.

In the same year, the Magufuli’s administration auctioned over 1,000 cattle belonging to Kenyan pastoralists who had trespassed into the country. At the time Magufuli said the country had been made a grazing land for its neighbors and that, he said, denied Tanzania tourism revenues. “And in that line, those who sneak with their livestock into this country will not be spared. We will confiscate them and do to them according to what our laws instruct,” said Magufuli. The move came a month after a court in the country ordered an auction of 1,300 cows that had trespassed into Tanzania after the Maasai herders were unable to raise a Sh23 million fine.

When he took over the reins in the country in 2015 he banned Kenyan milk company Brookside from collecting milk, directing that all milk should be produced and processed locally. “How many dairy firms do we have that are operational? Do you remember the Brookside Company in Arusha? It used to collect milk from the Maasais in northern parts of Tanzania, take it to Kenya for processing then bring it back to us to drink… Enough is enough,” Magufuli was quoted saying by The East African.