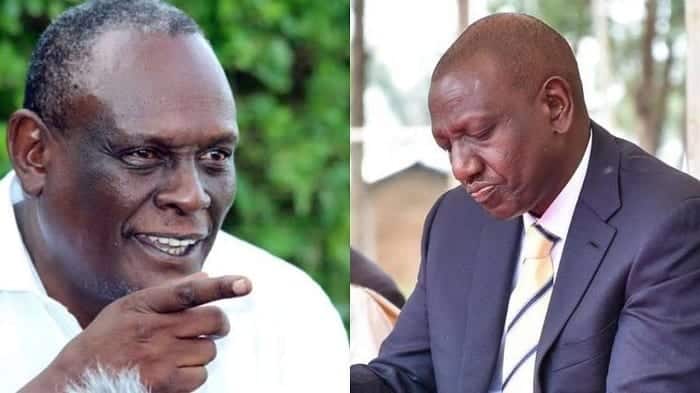 Jubilee Party Vice Chair David Murathe has made disparaging allegations about Deputy President William Ruto, adding that it may have affected the relationship between him and President Uhuru Kenyatta.

Speaking during an interview on Inooro TV on Sunday night, April 18, Murathe sensationally claimed that Ruto was heard disparaging Uhuru as a drunkard at the height of the 2017 re-election campaign.

Murathe claimed that the speech, allegedly made in Kalenjin language, was relayed to Uhuru by the intelligence agents and may have contributed to the head of state’s decision to cut the DP’s powers in his second term.

“There is a day Ruto spoke in his native language and told his supporters to vote for Uhuru because as he drinks, I will be running the government,” Murathe claimed.

“It was during the funeral of the late Mark Too. The government always has a way of knowing some of these things. I suspect that was one of the reasons Uhuru decided to sideline Ruto was this statement,” the Jubilee vice chair added.

Murathe also accused the DP of insulting the president with the recent claim that the Jubilee Party was run by people who are “hardly sober”.

“He should stop hiding behind us (officials). He is the deputy party leader and above him is the party leader, there are a number of officials who are above me so when he insults people like Murathe, how can a vice chairman be calling the shots, those indults are directed at someone else,” the Jubilee Vice Chairman stated.

Kenyans.co.ke was unable to independently verify the claims, while a source from the DP’s camp said they were not keen on responding to Murathe.

“We have serious priorities as hustler nation, the cabal that is ever drunk is not one of them,” our source said.

Murathe also clarified an accusation that Elgeyo Marakwet Kipchumba Murkomen had alleged that the Jubilee vice-chair was drinking alcohol during a Citizen TV interview in which they were both guests.

“I was very tired and had a glass of water and Murkomen alleged it was alcohol. They revert to insults when they are unable to debate and that is why I told him to join me in drinking.

“If at all we are drunk and giving them jitters, what about if we deal with them when sober?” Murathe questioned jokingly.

The deteriorated relationship between the head of state and his deputy has led to cracks within the Jubilee party and the government by extension.

In a recent interview with Citizen TV, DP Ruto said that if given an opportunity to become president he would not allow his deputy to be mistreated the way he has.

Ruto also stated that he had confronted President Kenyatta in the company of NIS officials to try and resolve the issues between them.

President Uhuru given 14 days to respond to suit

Kenyans Uniting for One Diaspora, One Voice under KUDO