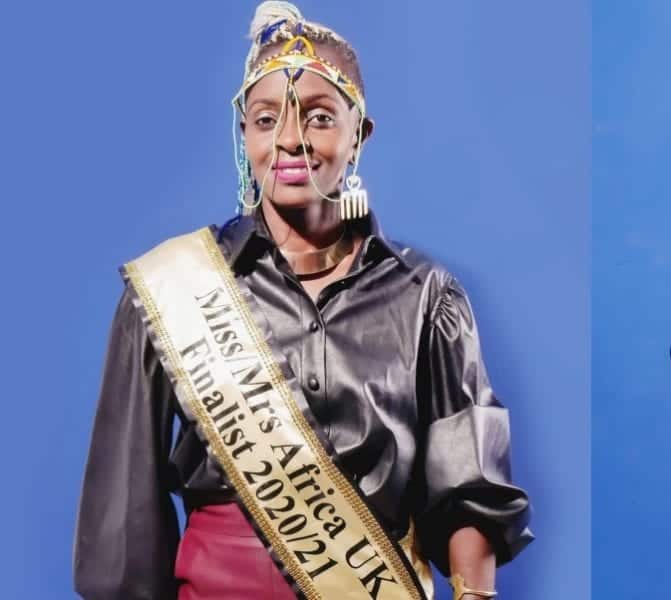 A Kenyan woman Anne Njeri who  lives in Northern Ireland has flown the Kenyan flag high after making it to the finals of a high-profile empowerment pageant in the United Kingdom.

Anne Njeri was selected as one of 15 finalists in the pageant dubbed Miss/Mrs Africa UK which seeks to empower passionate, strong, and driven women of African descent living in Britain.

TUKO.co.ke caught up with the 38-year-old beauty queen who explained it was her first time to be in the modelling world but she was also quick to point out that the contest was not merely about looks but about recognising African women living in the UK who are impacting the society.

“It was launched in 2020 just before coronavirus pandemic by a South African to appreciate women living in the UK but are of African descent. I have actually never been in a beauty contest but the experience has been amazing.

I have learnt so much in the different workshops I have attended,” Njeri said. She said she moved into the country in 2019 after getting married to her Irish husband. While joining the contest in 2020, she thought she had lived a short time in the UK to qualify to be Miss/Mrs Africa UK 2020/2021 but it was all about empowerment.

“This beauty contest is not really about looks and the unrealistic beauty standards the society puts on women, as long as you are a black woman who helps the society in one way or another,” the mother of one said.

According to information on the Miss/Mrs Africa website, the pageant is open to women who are 30 years of age and above and who are eager to make a difference in the UK and Africa at large.

Njeri said the winner will be announced anytime from July 2021 and she is hopeful she has what it takes to emerge the Miss/Mrs Africa UK.

“There are around 15 finalists. I have faith I can emerge the winner but above all, I am grateful for this experience, I have been learning so much,” an excited Njeri said who is also into charity work.