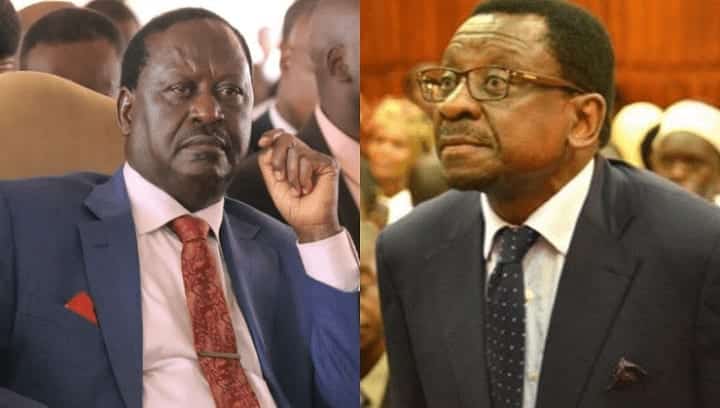 The simmering political tension between ODM leader Raila Odinga and Siaya Senator James Orengo has spilt over into the public arena and is threatening to tear apart the Orange Party.

Their falling out has been triggered by the Building Bridges Initiative but it points to long-standing ideological differences, including how the handshake deal between Raila and President Uhuru Kenyatta was executed. Orengo and others in Raila and Uhuru’s inner circles were excluded.

During the BBI Bill debate in the Senate on Wednesday, Orengo dissected the Bill to amend the Constitution. He returned a negative verdict on several key sections.

The senior counsel said some proposed amendments will entrench inequality and asked whether there is goodwill to implement the progressive provisions.

“Section 11(a) talks about the economy and shared prosperity. I hope it’s not just there to please ourselves…I wonder whether we would achieve that. In the last two months, if you look at the appointments that have been made, I don’t know whether we are going in that direction,” he said in a clear dig at the President.

ODM has said it will unconditionally support BBI as the only panacea for the country’s ills and challenges.

In the Senate, Orengo said people were agitated in many parts of the country, including in his Nyanza backyard, about the sharing of constituencies through the creation of 70 new ones.

“Kakamega county has one of the biggest populations. Explaining how Kakamega is getting two constituencies is a bit of a problem if you are using a scientific process,” he said.

The position taken by Orengo and a section of his allies, mainly lawyers from Luo Nyanza in the National Assembly, has enraged Raila’s inner circle.

On Thursday, Raila’s spokesman Dennis Onyango went public referring to some unnamed leaders as “demagogues” known only for “discussing politics in flawless English and legal jargon on the floor and public rallies”.

Onyango insists Raila has changed strategy from combative politics, which has never handed him power in previous polls.

“We are taking a new path. The politics of jokanyanam untie? The people of the lakeside, are you there? The politics of excitement for the sake of it must end,” he wrote on his Facebook page, triggering massive interest.

“The demagogues have had their years, indeed decades, discussing politics in flawless English and legal jargon on the floor and public rallies. It is time for a different path.”

Referring to all Kenya’s previous heads of state, including Uhuru, Onyango argued that none of them publicly spoke about their schooling or ideological stand and yet they ascended to the presidency.

“Jomo Kenyatta never spoke flawless English. Nobody knows where he stood ideologically. Nobody knew his high school or university faculty. But he ruled Kenya for 15 years,” he stated.

Onyango appeared to have been responding to Rarienda MP Otiende Amolo, also a senior counsel and Orengo’s ideological soulmate.

Otiende, seen to be one of the most eloquent debaters, had taken a dig at ODM chairman John Mbadi, telling him to be quiet since he lacked legal training.

“John Mbadi, you have not stepped into law school, so just allow me,” Otiende said in Parliament, explaining why the proposed 70 constituencies are unconstitutional

By  FELIX OLICK AND JULIUS OTIENO

Word of the Day:Lord use me as I am

THE DAY YOUR PROPHET RUNS MAD