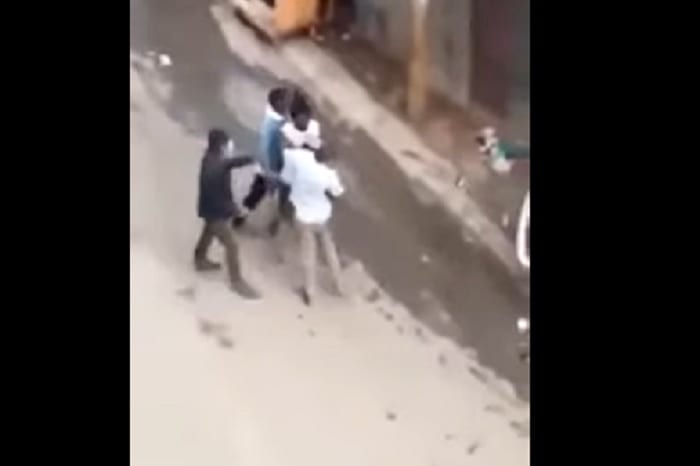 A daylight robbery was on Wednesday, May 19, captured on video as three thieves robbed a resident in Mlango Kubwa estate.

In a post shared across social media platforms, the thieves surrounded the resident and proceeded to ransack his pockets.

The daring robbers did not hesitate to threaten the victim with sharp objects, as he stood helplessly and watched the perpetrators carry out the heinous crime.

The thugs openly approached the victim to commit the crime with the local residents who stood as the events unfolded surprised many Kenyans online.

“You see this is your poor and sick mentality….everybody watches but nobody act!! that’s Nairoberry.

“You wonder how someone could be robbed in broad daylight as other residents watch,” angry Nairobi residents lamented after the video was published.

The incident mirrors a similar case in January 2021, where two armed thugs were captured on CCTV robbing Nairobi residents during the day.

The thugs had concocted a plan to approach their victims pretending to ask for help. After gaining their trust, they would proceed to attack their victims and flee in a motorcycle.

The rising crime rate has been a worrying concern for the majority of Kenyans who claim that the vice has become rampant.

According to a recent report by the Kenya National Bureau of Statistics (KNBS) titled Economic Survey 2020, robbery cases within the country increased by 8.6 percent during the year 2020 as compared to the same period the previous year.

The report also detailed that crime had risen in various counties such as Nairobi, Kiambu, Meru, Nakuru, Mombasa, Kisii, Machakos, and Murang’a.