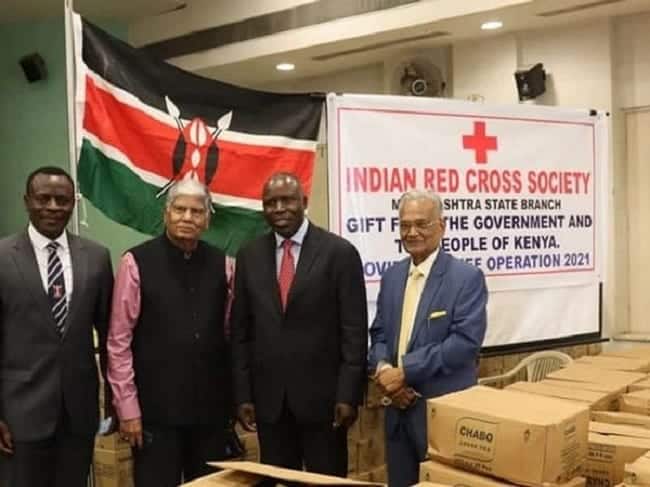 Kenya is also among the countries that extended its helping hand to India in its fight against the coronavirus pandemic.

As India battled a devastating second wave of the coronavirus pandemic, several foreign countries across the world, including the United States, came out in support and extended medical assistance to help the country tide over the situation.

Leading countries like the US, Russia, Germany and France, sent critical medical supplies to India such as oxygen cylinders, medicines and diagnostic tools, to help the country in its fight against the pandemic.

Kenya is also among the countries that extended its helping hand to India in its COVID battle. The east African country has donated 12 tonnes of food products, including tea, coffee and groundnut produced locally to the Indian Red Cross Society as part of its COVID-19 relief efforts.

“The Government of Kenya wishes to stand in solidarity with the people and Government of India during this time of the COVID-19 pandemic by donating consumable food stuffs,” Willy Bett, high commissioner of the African country to India, said.

Bett, who came to the financial capital from New Delhi to hand over the food articles, said the donation is directed to the frontline caregivers who continue to work long hours to save lives.

However, this heart-warming gesture was looked down upon by many people who ridiculed the east African country for gifting food products to India. Some social media users even referred to Kenya as a ‘poor country’, ‘beggar country’ and also called out India for accepting such gifts.

In this context, it is worthwhile to recall the following heartwarming story that shows the gesture of donation is important and not what it contains.

When Kenya gifted 14 cows to the US

The 9/11 terrorist attack at the World Trade Centre in Manhattan of the US, which killed more than 3,000 people, had shaken the entire world in 2001.

Several countries, including Britain and Australia, had sent their troops to Afghanistan to fight al Qaeda – the terror group behind the 9/11 attack, to show solidarity with the US.

When the news of the September 11 attack reached Enoosaen, a remote village in Kenya that is home to the Masai tribesmen, months later, the villagers decided to send 14 cows to the US as an expression of sympathy.

As per foreign media reports, the cattle – considered sacred by the Masai people – were handed over to William Brancick, deputy head of the US embassy in Kenya.

Masai tribesmen regard cattle as sacred and they generally gift it during marriage or homecoming.

The villagers took the decision after a Kenyan-born man Wilson Kimeli Nayomah, who was studying in New York at the time of the devastating event, narrated the gruesome incident to his people when he came home on vacation.

In a book “14 Cows for America” by Carmen Agra Deedy, Kimeli explains: “the Masai wish is that every time Americans hear the simple story of 14 cows, they will find a measure of comfort and peace.”

Doors of opportunity: From makanga to real estate boss