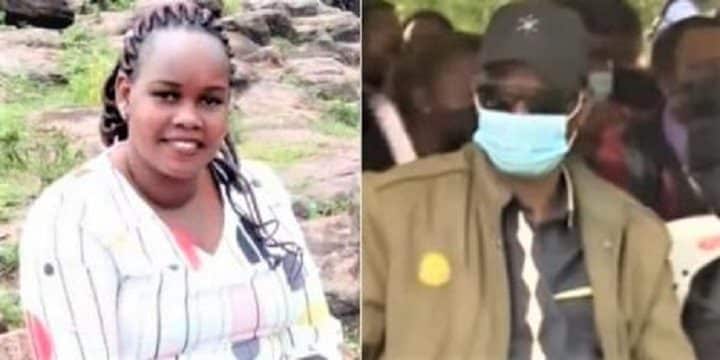 The officer requested not to be allowed to speak as his in-laws interred their daughter, who was alleged to have died by suicide.

He, however, took a seat near his daughter and son, who also travelled to pay their last respect to their mother. The officer sat in the same dais as Kangogo’s parents and maintained his cool, hiding emotions behind dark sunglasses.

“Kangogo’s husband declined to address the mourners owing to the controversy surrounding her death. The children too did not speak.

“Her brother read the eulogy on the parent’s behalf, as they too requested not to speak,” a reporter at the funeral in Nyawa village, Iten told Kenyans.co.ke.

No Motorcade For Ruto At Queen’s Burial, He Will…

He added that the deceased’s parents refuted allegations that their relationship with Kangogo’s husband had turned sour.

Kangogo, in an alleged suicide note recovered at the murder scene, claimed that the husband was the source of her woes. In the message saved as a draft on her phone, the corporal reportedly wrote that she never found peace after the husband allegedly left her for another woman.

The embattled couple were allegedly entangled in a messy divorce case. Kangogo, who was accused of assassinating two individuals – police constable John Ogweno and security expert Peter Ndigwa – claimed that she spared the life of her husband.

An excerpt of the alleged note read:

From Tuesday, I was in Mombasa and always saw you being picked and dropped. I wanted to kill you but I sympathised with my kids.

Depression is real, please assist those you know. My divorce pushed me to be inhuman. My father disowned me due to a failed marriage. My husband was allegedly first in calling my father and my brother to cover up his mistakes and they all fell into his trap.

Nothing belongs to my husband for I started from scratch after he allegedly left us. Since I met you, my husband, I have never known peace due to your mistreatments. Always allegedly chasing after women tortured me physically, mentally.

Since everything happened please take good care of our kids and don’t neglect them – as your first wife. Please don’t take advantage of love…current divorce

I forgave you. I hope you do the same.

Kangogo’s parents declined to honour her cremation wish and instead buried her in the wedding gown she chose. They preferred burying her according to the family’s Christian traditions.

Political leaders who attended the funeral urged the government and the National Police Service to look into the mental health of police officers.