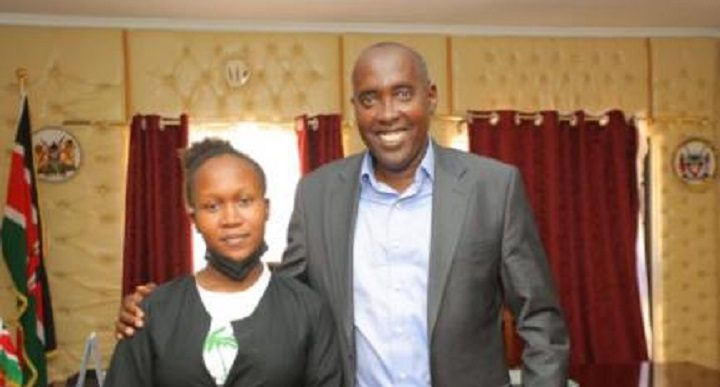 A family in Kajiado County can now sigh with relief after their kin Lilian Rimanto was safely flown back into the country, weeks after an uproar over the suffering of Kenyan immigrant workers in Saudi Arabia.

The worker, Lilian Rimanto, had travelled to the Gulf in search of greener pastures, where she got a job as a domestic workers.

Three months in, however, things turned for the worst when her employer began mistreating her, including denying her food.

Apparently, the mistreatment began after Rimanto sustained an injury after she tripped and fell. Her employer insisted that she was feigning the injury, and became hostile towards her.

She also revealed that the employer, who behaved like she owned her, confiscated her passport, making it hard for her to access basic services in the country.

“The embassy began looking into the case. Asked them if they would return my passport, but since they paid for all my travel needs, they did not return and cancelled my Visa.

“I was illegally in their country and I could not secure another job. I would not go to the hospital because it is very strict there. You cannot access medical care if you lack necessary documents,” stated Rimanto, according to Citizen TV.

She noted that while pursuing the matter, the embassy faced a lot of challenges in the process and it took personal intervention of Kajiado Governor Joseph ole Lenku who flew to the Gulf.

“I contacted the embassy who tried to follow it up, but they faced challenges because her employers wanted me to reimburse the funds,” stated Rimanto.

This is happening even as officials from the National Government plan to fly to Saudi Arabia to iron out mistreatment claims, which have led to the death of 97 girls under mysterious circumstances in a span of three years.

“I want to assure any Kenyan working locally or abroad that their lives are important. I believe the future is bright and we assure these ladies of their safety and comfort in Saudi Arabia,” noted Labour CS Simon Chelugui.

There are over 97,000 Kenyans working and living in Saudi Arabia.

Below is her video:

23-year-old woman who was stranded Dubai reunited with her family. Lilian Rimanto was allegedly mistreated by her employers in Dubai.