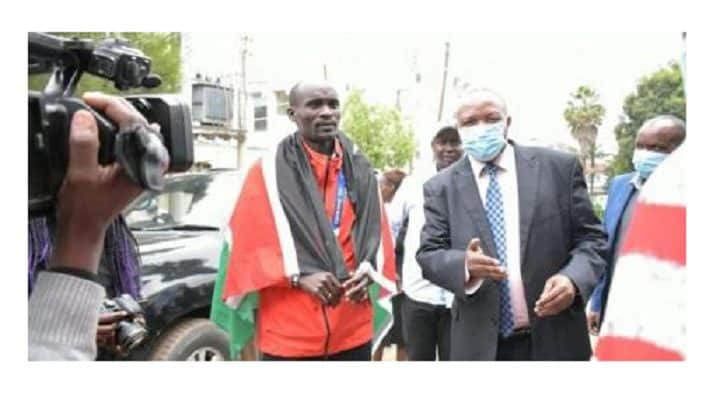 One of the athletes Ferguson Rotich who bagged a medal for Kenya in the just concluded Tokyo 2020 Olympics game was on Wednesday, August 11 rewarded with a government job.

The high-flying Ferguson Rotich, who bagged a silver in the 800 meters race, was given a top government job by the County Government of Kericho.

Kericho Governor Paul Chepkwony announced the appointment of Rotich in the role of Goodwill Ambassador for the fight against Drugs and Substance abuse in that county.

The appointment of the 31-year old athlete came after he paid a visit to Governor Chepkwony after his great achievements at the Olympics game where Kenya topped the medal table in Africa with 8 medals (3 gold, 3 silver, and 2 bronze).

The middle-distance runner clocked a personal best of 1:42.54 minutes for the even he represented the country at the 2013 World Championships in Athletics and was a gold medallist in the 4×800 meters relay at the 2014 IAAF World.

“The 2020 Tokyo Olympic 800m silver medalist, Ferguson Rotich appointed Goodwill Ambassador for the fight against Drugs and Substance abuse in Kericho County. Governor Paul Chepkwony made the appointment after receiving the athlete in his office today,” Kericho County wrote on their social media page.

His appointment comes as Kenyans continue to raise questions on the reception accorded to other athletes who landed in the country on Wednesday, August 11.

The Ministry of Sports and Culture was castigated for failing to accord the athletes a befitting reception despite recording an impressive performance.

The uproar was ignited after Olympic Marathoner and World Record Holder, Eliud Kipchoge, jetted into the country only to be received by family members and friends at the Jomo Kenyatta International Airport (JKIA).

This was different from Uganda where government officials, family members, officials from various sports associations, and federations all waited to receive their heroes and heroines.

The athletes were even hosted at a luncheon by Ugandan President Yoweri Kaguta Museveni.