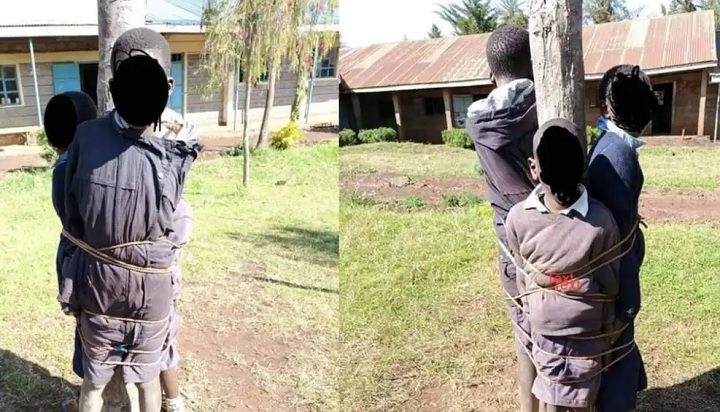 Two teachers who were arrested on Thursday, September 2, for tying three pupils to a tree as punishment have been freed.

The teachers were freed on a police cash bail after the Director of Public Prosecutions (DPP) sought more time to peruse the case files.

Appearing before Nyahururu Senior Resident Magistrate Susan Mwangi, the DPP asked for more time to compile the case and determine charges to prefer on the two teachers from Thiiru Primary School in Laikipia County.

The magistrate ordered that the police cash bail be extended until Thursday next week when the school’s headteacher and her deputy will be arraigned.

Detectives from the Directorate of Criminal Investigations (DCI) were called upon to investigate the case in which three pupils were tied on a tree.

A multi-agency task force directed the DCI to probe the two senior teachers from Thiru Primary School in Nyahururu.

A photo of the three pupils tied on a tree went viral on Wednesday, September 1, causing backlash from Kenyans who accused the school of treating the pupils inhumanely.

It is alleged that Maina tied the three on a tree before photographing them and sharing the pictures on the school’s WhatsApp group.

A member of the group later shared the photos online which then went viral.

The Deputy County Commissioner and his officers carried out interviews on the incident at the school for a better part of Wednesday.

The Teachers Service Commission issued a statement terming the act as inhuman, saying that it lowers the pupils’ self-esteem and motivation.

The photo elicited emotions of anger from a section of Kenyans who argued that it was wrong for teachers to use such methods while disciplining students.