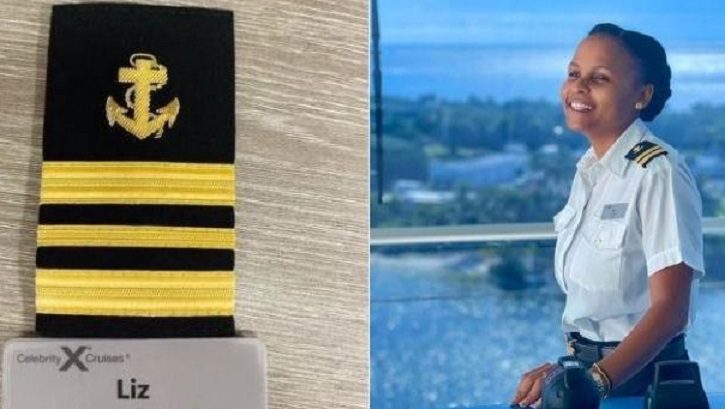 In an announcement made by Captain Kate McCue, Marami was promoted from 2nd Officer to 1st Officer of Celebrity Edge, a ship operated by Celebrity Cruises.

Marami was among three other mariners promoted during the ceremony. Her colleague Mary Gi was also promoted to First Officer while Calvin Kent was promoted to Second Officer.

“The only thing sweeter than a promotion is…3!!! Congratulations to our new 1st Officer Liz Marami, 1st Officer Mary Gi and 2nd officer Calvin Kent,” read the caption by Captain McCue.

This is Marami’s second milestone at the company. On March 8, 2020, she was part of the first ever all-female team that set sail, making history in the process.

Following her promotion, she will now wear a badge with three stripes as compared two the one she wore as a second officer which only had two. A first officer is tasked with keeping tabs on what happens in the ship and report directly to the Captain.

Marami will be in charge of the bridge – the area of the ship where the crew operate the ship from, and ensure that the operations and navigational equipment are functioning properly.

As a marine pilot, her job entails assisting ships with coming into territorial waters.

Marami first made headlines in July 2019 during the commissioning of Bandari Maritime Academy presided by President Uhuru Kenyatta. She captured the attention of Kenyatta when she told her life story.

She was born and raised in Mombasa, where she later joined Mama Ngina Girls’ High School.  She scored an A – (minus) in her KCSE exam and was admitted to pursue a degree in law at the University of Nairobi.

However, after few months, she dropped out and signed up for a degree in Nautical Technology. She managed to secure a scholarship to study at the Arab Maritime Academy in Egypt where she graduated with a First Class Honors.

She trained as a marine pilot and ended up becoming Kenya’s first female maritime pilot.