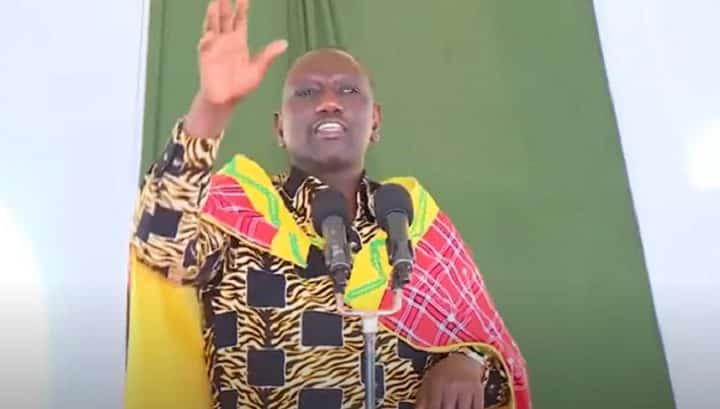 Deputy President William Ruto has challenged Interior Ministry Cabinet Secretary Fred Matiang’i to share out the 15,000 acres of land that he told a Parliamentary committee belonged to the him.

Speaking on Thursday, September 9, Ruto stated that since the dossier read before the National Security and Administration Committee indicated that he owned 15,000 acres of land in Laikipia he was willing to give it up.

The DP stated that he wanted the government to distribute the 15,000 acres of land at the Laikipia Mutara Ranch.

Further, the DP said he had issued express authority to have the ranch that Matiang’i claimed is protected by six police officers to be given to Laikipia residents for grazing.

“They said I own land in Laikipia. Since they said I own the land, I have given them authority to distribute it to members of the public,” DP Ruto stated.

The DP challenged the Inspector General of Police Hilary Mutyambai to keep off politics and focus on the security of the country as cases of insecurity increase, especially in Laikipia County.

“IG of police should keep off politics because his job is independent in the Constitution. He has been given the mandate to oversee security matters and he is putting the country at risk as he engages in politics instead of his designated duties,” the DP added.

Ruto was speaking during a meeting with grassroots leaders from Narok South in his Karen residence.

Meanwhile, MPs allied to the DP issued a statement at Parliament buildings on the insecurity in Laikipia County. They criticized the police for laxity in dealing with the matter when it was first reported.

According to the MPs, the police have been firm in disrupting political gatherings, but the same efforts have not been put to disband the bandit attacks in Laikipia that have cost ten lives.

“We, however, observe that this zeal and dedication has been completely lacking when genuine security threats that legitimately demand decisive police response.”

“As a result, Kenyans have lost lives, many others have been injured and colossal value of the property has been lost. Thousands of Kenyans are now displaced.”

“Learners have been deprived of schools. Women, the elderly and the disabled are now experiencing intensified vulnerability. Under any circumstances, this state of affairs would be grossly unjust and unacceptable,” part of the statement read.

Led by Kandara MP Alice Wahome the MPs called for the resignation of the Inspector General of Police Hilary Mutyambai over what they termed as failure to demonstrate the independence, leadership and professionalism of the calibre demanded by the constitution of his office.