Each year, to raise public awareness of gender-based violence across the world, the United Nations recognizes 25 November as the International Day for the Elimination of Violence against Women. The day also begins the 16 Days of Activism against Gender-Based Violence, which culminates with International Human Rights Day on 10 December.

According to the United Nations, violence against women as, “any act of gender-based violence which can result to any sexual, early marriages, physical, mental and economic harm inflicted to women in public or in private. It also includes threats of violence, coercion and manipulation.” 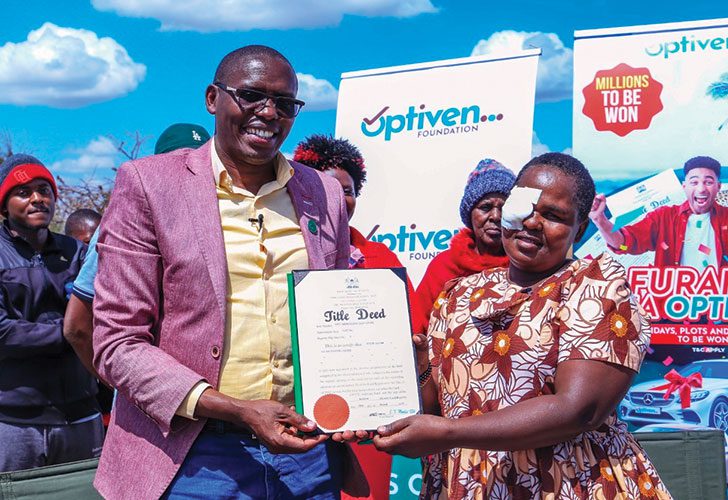 For this to be fully eliminated, women need to be given an opportunity to participate fully in society, in both decision making and economic actors which is highly discouraged by gender based violence. Empowering women economically in the rural and low class settlements, will highly reduce gender based violence because it will strengthen their sense of independence.

Optiven’s Foundation initiative is essential for its endeavors to arrive at youth specifically those from vulnerable backgrounds. We have donated sanitary towels to girls who are not able to afford to buy the towels every now and then. Some of the girls have been forced into sex with older men in exchange for sanitary products which sometime leads to teen pregnancies and early marriages. Our aim as the foundation is to stop this type of gender violence against women.

Optiven Foundation sponsors secondary and special education for needy students from 47 counties in Kenya so that they can positively contribute for the development of the society and people around them. Optiven Foundation, through the Soaring Eagles Sponsorship Program, offered education sponsorship to Agnes Muthoni, a girl who was on the verge of dropping out from school when she was in form three.

Optiven Foundation donated a land worth 1.5 million shillings at the Garden of Joy to Josephine Leshao, a woman who was sold off to her husband at the age of 13. Her husband went on to get 9 more wives and infected all of them with HIV/AIDS. The mother of three is also nursing cancer but is nonetheless determined to write a different script for her life and that of her children and so she started a fresh.

Josephine was one of the three families whose stories were highlighted in an effort to get one of them a piece of land donated by Optiven Foundation. According to UN, supporting rural women and girls who come from humble backgrounds, gives them opportunity to fully and equally participate in decision-making at all levels, in the process, this allows women a greater degree of safety from harm.

New Year New Perspective: What To Do In Order To Succeed In…

Gender based violence, keeps on being an issue that many individuals, girls and women, experience in their working environments, networks and homes, sabotaging their wellbeing, usefulness, financial incorporation and generally strengthening. At Optiven Foundation, we trust that further developing gender equality and building flexibility is critical to forestalling and halting gender based violence, and we stay focused on putting resources into the more long-term change of women’s status and their roles around the world.

Women told to be wary on social media, dating sites

The Impossible Is Possible: How my primary school dream of flying came true

WETANGULA NURSING INJURIES AFTER BEING BATTERED BY WIFE