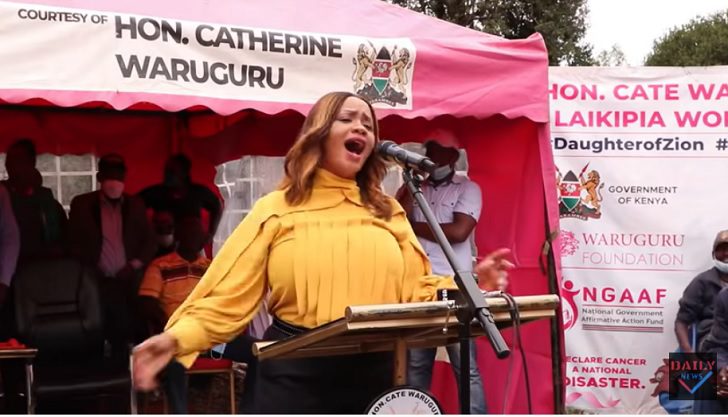 Laikipia Woman Rep Catherine Waruguru has officially made the much-awaited announcement of her future political plans.

While making the announcement on Saturday in Laikipia in a function, Waruguru said that she has held more meetings with the locals regarding the future political move, which ensured that she made the right decision.

She said that she wants to be on the right side of history, after supporting President Uhuru Kenyatta’s administration, which she said has delivered its promises.

Waruguru has asked DP Ruto to visit the county, in a function that she will be hosting.

She said that the ‘hustlers’ movement is unstoppable.

Her announcement comes barely a week after she met with Nakuru Senator Susan Kihika, and Malindi MP Aisha Juma who are close allies of the DP

The MP also said that the move to challenge the decision of the Court of Appeal in its ruling on the BBI was ill-advised and that even if the Supreme Court decides otherwise, time will not allow for the process to be completed as the country is preparing for the 2022 general elections.

History of how Kibera, Mathare & Mukuru informal settlements were named

Muthama Reveals Who is Causing Fight Between Him and Kalonzo