The Kenya government has extended the deadline for the phasing out of the old generation passport.

In a statement by Immigrations Services Director General Alexander Muteshi, the government extended phasing out of the passports to November 2022.

Muteshi noted that the decision was arrived at following the 41st meeting of the East African Community (EAC) council of ministers held in Arusha in 2021.

“Since Kenya as a member state is bound by the Council’s decisions, we will abide by this directive for now,” the statement read in part. 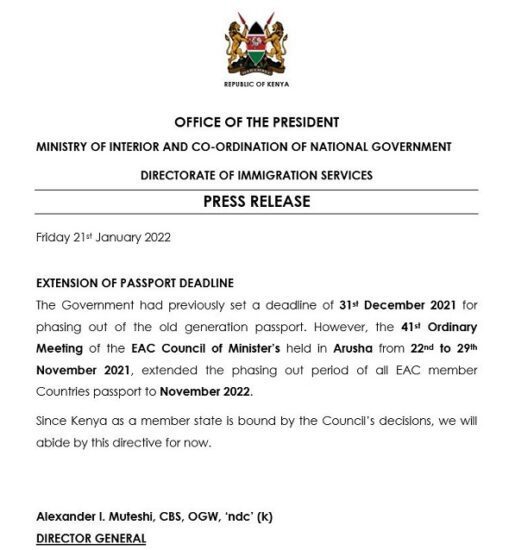 Kenya is rolling out the e-passport as part of the binding commitment by the EAC to move to the new biometric e-passport.

The e-passport will have features that are meant to make it impossible for anyone to forge or duplicate a Kenyan passport in a bid to tame rampant forgery and impersonation of holders.

The decision to have the e-passport was arrived at during the 17th Ordinary Summit of the EAC Heads of State.

The issuance of the e-passport was to start by January 1, 2017 but it failed due to lack of preparedness.