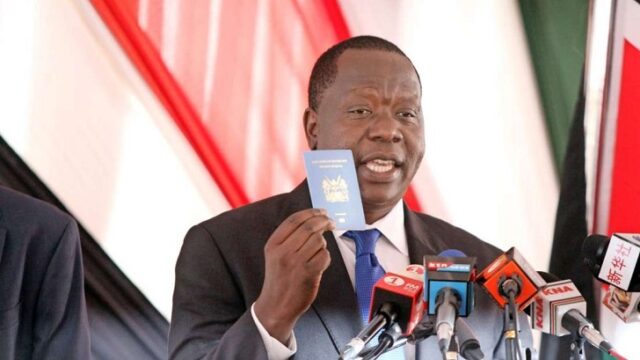 The Kenya Government has announced that the deadline for phasing out the old generation passport is November 30, 2022.  In a statement to newsrooms on Thursday, September 22, the Government urged Kenyans to acquire new passports before the deadline.

“The directorate for immigration services wishes to inform the general public that Kenya is bound to migrate fully to the new East African Community biometric e-passport by 30th November 2022.

“Kenyans are therefore hereby advised to acquire the new Biometric e-passport to avoid any inconveniences,” the statement reads in part.

The Government had previously set a deadline of December 31 last year for the phasing out of the old generation passport.

“Starting January 1, 2022, the old dark blue passport will be null and void and no Kenyan will be able to travel internationally without a valid East African Community biometric e-passport,” Interior CS Fred Matiang’i said.

However, Kenya extended the deadline for the phasing out of the of the old generation passports following a council meeting of the East African Community (EAC) member states.

Muteshi noted that the decision was arrived at following the 41st meeting of the East African Community (EAC) council of ministers held in Arusha in 2021.