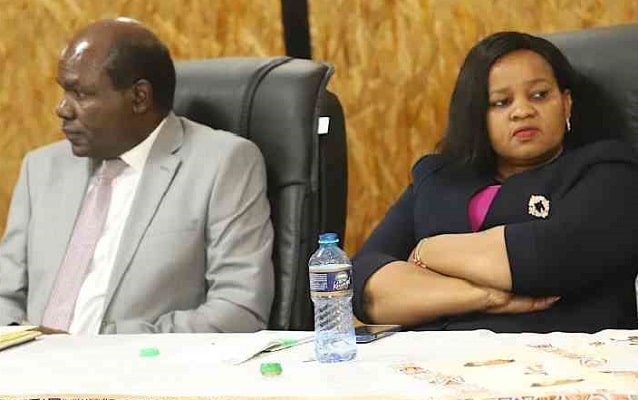 The row between the Independent Electoral and Boundaries Commission (IEBC) chairperson, Wafula Chebukati, and his deputy, Juliana Cherera, appears to have widened after the former called out his junior at a post-election evaluation meeting they both attended in Mombasa.
Chebukati, on Thursday, September 15, blamed Cherera and three other commissioners who opposed him, for the arbitrary arrest of IEBC staff and for maligning the Commission.

He first lamented that the chaos at Bomas subjected him, commissioners Abdi Guliye and Boya Molu, and CEO Marjan Marjan to assault and bodily harm.

“The most unfortunate incident was the false accusation by commissioners and fellow staff – under oath – that exposed innocent hardworking staff to arbitrary arrests and abductions, intimidation and harassment by security agencies and political goons, and other forms of obstructing election officials from conducting their duties.

“These shameless attacks amounting to election offences were perpetrated by, among others, persons regarded as national leaders in full view of the whole nation and the world at large,” Chebukati hit out at Cherera who was present at the meeting.

The IEBC boss explained that following the appointment of commissioners Juliana Cherera, Irene Masit, Francis Wanderi and Justus Nyang’aya – the four who dissented – the Commission established committees which each commissioner chairing one.

This, he stated, was aimed at enhancing the policy and strategy formulation, and oversight function of the commission.

During the election period, Chebukati explained, the primary role of the commission was to ensure that election results were verified, tallied and announced.

All the members of the commission had unrestricted access to the floor of the tallying centre to monitor and supervise the election results verification process according to the CEO.

“It is therefore insincere for any member of the commission and senior staff to allege that they were barred from providing assistance to the election management process. It is even tragic that some members of the commission would petition the Supreme Court of Kenya to nullify results that we collectively worked under difficult circumstances to deliver for the people of Kenya.

“The unfounded allegations that the election results management process was opaque is totally oblivious to the fact that returning officers had to spend a minimum of three days at the national tallying as their return of results were verified in the presence of agents, the media and observers before the announcement,” Chebukati slammed his juniors.

Earlier on, he welcomed the recognition by President William Ruto who singled him out Chebukati as one of the heroes of the August 9 polls.

Ruto praised Chebukati for having the courage t withstand tribulations, saying that he set a new standard by raising the bar of the integrity of public officials and public institutions

Even as the row between Chebukati and Cherera escalated, the former and the dissenting commissioners also acknowledged the Supreme Court ruling, reiterating that they stand by rule of Law and Statutes that promote the effectiveness of the work of the Commission.

“We wish to convey our appreciation to the Honourable Judges of the Supreme Court of Kenya. and confirm that we respect their collective decisions,” their statement read.

However, their acknowledgement was not enough to convince Kenmya Kwanza against going after their jobs. Garissa Town MP led the clamour, arguing that the four commissioners should be held accountable for their actions.

Farmers Party, an affiliate of Kenya Kwanza, later filed a petition in court seeking to ouster the four commissioners.