Azimio leader Raila Odinga has come under heavy criticism following the death of the bodyguard of his wife Ida Odinga. Ida’s bodyguard, Barrack Otieno Oduor, was shot dead on Friday morning, October 14, in an entertainment joint in Kisumu.

After his death, Raila took to his social media pages on Friday to share details of his meeting with India’s new High Commissioner to Kenya, Namgya Khampa, at his home.

The ODM leader said that they discussed the strong bonds and ties between India and Kenya even as he shared photos of the meeting. Ida was also present at the meeting.

“The strong bond and ties between our nations formed the core of our discussion as we hosted India’s new High Commissioner to Kenya, Namgya Khampa. We wish her all the best as she begins her tour of duty in Nairobi,” Raila stated.

The post, however, seemed to irk a section of Kenyans who called on the former Prime Minister to mourn Ida’s bodguard.

According to a section of netizens, Raila could have at least publicly mourned the deceased bodyguard instead of sharing the details of his meeting with the Indian High Commissioner to Kenya.

“Raila don’t u know the bodyguard attached to ur wife was shot dead this early morning,I haven’t seen u talking about it , instead you posting meeting Indian High Commissioner,” a netizen said.

Below are some of the reactions as captured by Nairobileo.co.ke.

The strong bond and ties between our nations formed the core of our discussion as we hosted India’s new High Commissioner to Kenya, Namgya Khampa.

We wish her all the best as she begins her tour of duty in Nairobi. pic.twitter.com/DHDQ6lbVhp

Family of your bodyguard is mourning of the dead of the loved ones you guys are here posting nonsense 🚮🚮 Go mourn with the family! 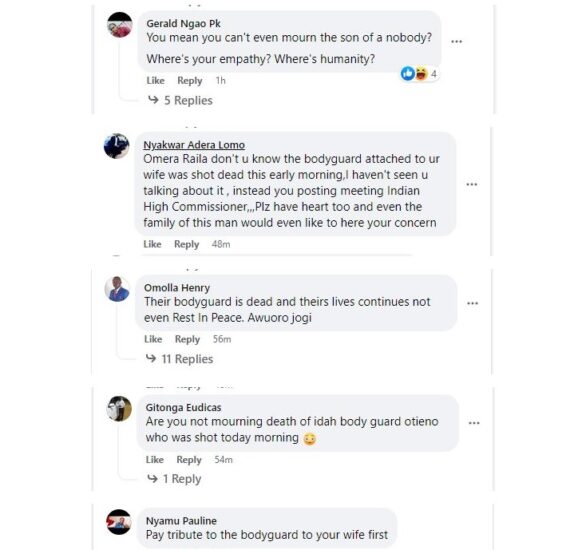 In a report made on Friday, October 14, by one Marilyn Marion Ouma a resident of Victoria Gardens Estate, the deceased was shot by Collins Okundi, a manager of club Signature Kisumu.

According to the police report, Okundi followed the deceased in the company of Ouma and Donar Kajwanga to Victoria Gardens Estate before a scuffle ensued between them.

In the process, Mr Okundi is said to have disarmed Ida’s bodyguard and shot him twice on the head and leg.

“Today the 14th of October 2022 at around 0330 hours, it was reported by Marilyn Marion Ouma a resident of Victoria Gardens Estate House no.55 and of mobile number 0798588266 that she had left Dondez Bar & Restaurant as accompanied by her friend Donar Kajwang and a police officer Cpl Barrack Otieno Oduor(now deceased)(Bodyguard to Dr Aida Odinga).

“Upon reaching the Estate, one Collins Okundi, a Manager of Club Signature Kisumu suddenly appeared and a scuffle ensued between the reportee, Donar Kajwang and Cpl Barrack Otieno Oduor. In the process, Collins Okundi disarmed the police officer and fatally shot him twice in the head and leg. Donar Kajwang was shot in the leg and was rushed to Aga khan Hospital Kisumu and is in a stable condition. The suspect Collins Okundi immediately left with firearm of the officer. Scene was visited by DCI Kisumu Central, Deputy SCPC Kisumu Central, and CSI personnel,” the report read in part.

Police are in pursuit of the suspect and is said to have left with the firearm of the officer (deceased).