Ruto Fires Back at Raila Over Removal of 4 IEBC Commissioners

President William Ruto has hit back at ODM leader Raila Odinga over his criticism of the government regarding the parliamentary process that seeks to have four IEBC commissioners removed from office.

The four are Vice chairperson Juliana Cherera and commissioners Francis Wanderi, Irene Masit and Justus Nyang’aya are facing petitions for their removal from office.

The President in a tweet on Friday morning told off the opposition saying the rule of law must be allowed to take its course.

The President said the officials who risked putting the nation in danger for subverting the democratic will of the people must pay the ultimate price.

“The lords of impunity, who destroyed oversight institutions using the handshake fraud, should allow parliament to hold rogue officials who put the nation in danger by subverting the democratic will of the people to be held to account. The new order is the RULE of LAW not the wishes of big men,” the President tweeted.

The response comes after Raila held a press conference on Thursday during which he castigated Ruto for targeting the four IEBC commissioners.

The ODM leader who was in the company of his Wiper counterpart and Narc Kenya leader  Martha Karua accused Ruto of seeking revenge through the four commissioners.

Raila had said by summoning the commissioners, Parliament is usurping the role of a tribunal.

“They are trying to prejudice whatever tribunal could be formed. Parliament roles must be limited to summoning the petitioners and deciding whether the issues raised warrant the setting up of a tribunal,” he said.

Raila said the conduct of IEBC was part of the election petition and none of the commissioners was found to have committed any offence but Chebukati.

“Only IEBC chairman Wafula Chebukati was found to have acted unilaterally, this problem is therefore politically motivated and a continuation of the witchhunt mission that President Ruto is on,” he said.

“It will turn into a native partisan fight.” 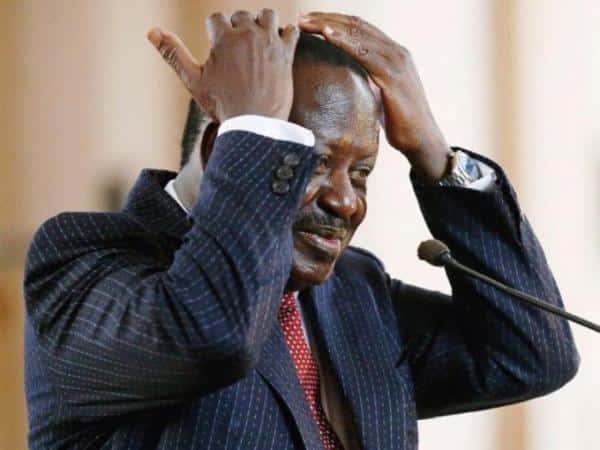 The future of Mr Odinga’s Azimio also looks bleak, as some parties have already left and entered into post-election agreements with the ruling Kenya Kwanza Alliance, while officials of the Jubilee party — a major coalition partner — have also fired a warning shot.

Mr Odinga’s failure to capture state power seems to be contributing a lot to his setbacks, as various leaders in his camp say they want to work with government “to develop” their regions.

Further still, several leaders who backed his bid in the last election but lost are now jobless, and with limited roles in the opposition, Mr Odinga is unable to accommodate them. As such, they have taken a back seat in politics.

The silence of former President Uhuru Kenyatta, the Azimio council chairman, who has already assumed his role as peace envoy for the Great Lakes and Horn of Africa region, also compounds the pressure the ODM leader faces to maintain his grip on national politics.

The Orange Democratic Movement (ODM) boss is not sitting pretty, with most of his political bases restless and at risk of being snatched from him. Some of his allies, particularly from Coast, Western and Mt Kenya regions, are already pledging loyalty to the Head of State.

Deputy President Rigathi Gachagua has also fuelled the disquiet in Azimio by launching an onslaught against its members in Mt Kenya region, whom he hopes to rally into his fold before the end of the year.

Mr Odinga is a man under siege.

Today, the opposition chief and the Azimio leadership are set to host coalition governors for a two-day retreat in Naivasha to discuss the way forward after the August election defeat and “unity of purpose” amid a government onslaught to lure and divide the opposition.

“I will attend tomorrow’s meeting with governors but our leaders will communicate the agenda once we are there. Basically they will be housekeeping issues and how to ensure devolution is a success,” Mr Oparanya told the Nation yesterday.

The need to give keen attention to the regional economic blocs to spur county economies and enhance their self-reliance, Nation established, will also form part of today’s talks in Naivasha.

The meeting comes against the backdrop of various coalition governors pledging their loyalty to President Ruto and his administration, something that seems to threaten the unity of the opposition.

Governors Abdulswamad Nassir (Mombasa), Gideon Mung’aro (Kilifi), Julius Malombe (Kitui) and Wavinya Ndeti (Machakos) are some of the Azimio county chiefs who have been on record affirming their commitment to work with the Ruto administration to enhance development of their counties.

Yesterday, Mr Nassir told Nation that he will attend today’s meeting in Naivasha, adding that their public pronouncements to work with the national government should not be misconstrued to mean defection or shift of loyalty.

Mr Nassir defended his pledge to work with the government, saying: “Kenyans should not have the insinuation that people can only make news when they fight.”

“This is the President and I was showed respect by being informed of his visit to my county, he made several promises, including promising a dual carriageway from Mombasa to Malindi, surely, do you expect me to look at the man and start to rebel?” the governor asked.

He added: “Kenyans have already made a decision, but inasmuch as we disagree with the outcome, we have no option but to work with the government for the sake of our people.”

Mr Oparanya, who is also the ODM co-deputy party leader, said that even though the coalition faces various pressures, there is a scheme by their opponents to start a non-existent war amongst Azimio leaders.

Allegations that he said he was done with Mr Odinga, he added, were spinned out of context to portray Azimio and ODM to be crumbling. “People are spinning what I said. I only asked for Raila’s support in future. How could I say that I am done with him yet I need his support to be president?” asked Mr Oparanya.

“We have sacrificed a lot and I cannot leave this party at this point in time. I have spent money in this party and I have been loyal for nearly 20 years since its inception in 2005. I want to fight from within,” Mr Oparanya said.

He, however, agreed that a section of leaders from Western Kenya were disgruntled, and needed an intervention of the party leadership. “Our people are also discontented and I will discuss the matter with my party leader at a personal level. So there is no cause for alarm,” the former Kakamega governor said.

Ruto Fires Back at Raila Over Removal of 4 IEBC Commissioners

Word Of The Day: Good Shepherd or Hireling