Kenyans living in the United States came out in large numbers to attend President William Ruto’s meeting with the Diaspora at Washington Plaza Hotel in Washington DC on December 15th 2022.

During his speech, the President said that the Government will improve Consular services to Kenyans living abroad. The President stated that the newly created State Department for Diaspora Affairs will boost service delivery to Kenyans abroad.

He promised that the Government is working on a plan to provide Biometric services in Cities and Towns where Kenyans live hence no need to travel to Washington DC. 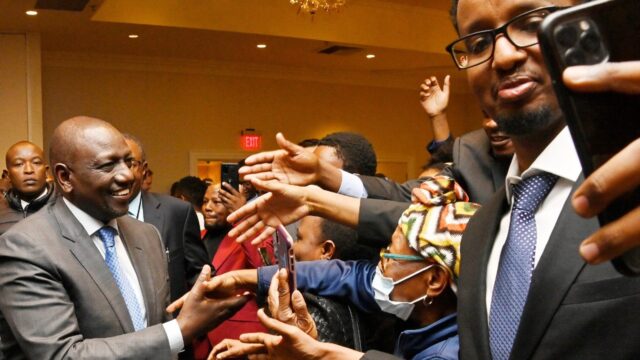 “We are going to decentralize and use technology to bring as many services as we can online. We know many Kenyans spend hours and days travelling to get consular services,” the Head of State said.

President William Ruto noted that the Kenyan Diaspora was a crucial player in Kenya’s economy. He said that Kenya does not have Silver, Gold or oil but have Human resources which is even better. “We are going to utelize these resources” He said.

The President further stressed that the Government will continue improving the Human resouces to increase the remittances which will help in building the Country.

He promised to address all issues Kenyans in Diaspora face and requested Roseline K. Njogu, the new Principal Secretary for Diaspora Affairs to work with the Diaspora and know their problems. “I don’t mind you if you stay away abroad for six months” The President told her.

“When you support your families back home you are also making a valuable contribution to the economy. Diaspora remittances are now Kenya’s biggest source of foreign exchange.

“‘We are keen to work with you; to utilize your networks to bring investments to Kenya so that we can create opportunities and move our country forward,” Ruto stated.

One question that was asked and the President failed to answer or forgot was the issue of security in Kenya. One woman had asked about the 999 emergency number that stopped to work many years ago making many Diaspora Kenyans visiting home worried of what they would do in case of a problem.

Dr. Alfred Mutua said that the Kenya Government is working on a system whereby they will be having a roving Biometric machine that will be able to go around the United States to help people get their documents faster without traveling long distances. He also said that they are working on a system whereby they will have offices to be dealing with issues of visas, IDs and Passports where people live so that again they don’t have to travel for the services.

For Passports, he said that they are working on a system to issues passports as fast as one wants, if you want your passport in regular speed of two weeks you pay the normal fee but if you want it in one week or in few hours, you pay a special fee.

Moses Kuria  said that the Kenya Government is planning to build at least 7 warehouses in United States where people can bring their Kenyan products there for distribution and will have e-comerce like Amazon to take it from there. He invited Kenyans living in the United States to register as distributors.

Also in attendace was Nelly Cheboi the 2022 CNN Hero of the Year and Prof. Jerono P. Rotich a committee member of Ruto Education Dream Team To Review CBC.

Nelly Cheboi is a software engineer and won the award thanks to her philanthropic work through her company TechLit Africa and Dr. Jerono Rotich is an Associate Dean at Indiana University USA and was appointed to serve at UNESCO on the Commission of Research & Publication of ICTSG, established at the 2018 UNESCO Collective Consultation on TSG.

Mandera attacks planned and FINANCED by the Opposition