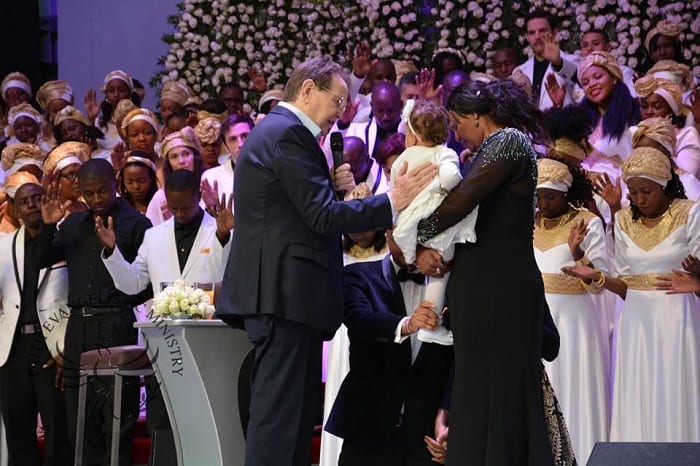 On Saturday, Rev Bonnke conducted a wedding ceremony between Robert Kinyanjui and Flora Kamila at the Nairobi Primary School grounds.

A congregation of about 10,000, including partners of the Faith Evangelistic Ministries, top government officials and chief corporate executives attended the event

Rev Bonnke, 71, is widely regarded as a trailblazer in open-air preaching and televangelism in Kenya, having attracted some of the largest congregations to his meetings across the country during his first mission to Kenya in 1988.

His big meeting at Nairobi’s Uhuru Park was attended by the who’s who in Kenya, including then President Moi, Vice-President Josephat Karanja and senior members of the Cabinet.

Since then, Kenya has witnessed a phenomenal growth in the number of public preachers and televangelists.

Television viewing on Sunday mornings is currently dominated by pastors and bishops battling for souls — and pockets — through church programming.

Rev Bonnke’s fresh footprints in the country are also to be seen in the close relationship his Christ for All Nations (CfaN) ministry has maintained with local Christian groups like the Faith Evangelistic Ministries founded by Rev Teresa Wairimu Kinyanjui.

Rev Wairimu, who says she looks up to Rev Bonnke as her mentor, is the evangelist’s host in his latest mission.

Rev Bonnke was last in the country 10 years ago.

But the German evangelist’s legacy in Kenya extends beyond the battle to win souls to local cultures where many families have adopted the Reinhard Bonnke name.

Ordinarily, the bouncing baby boy she would deliver shortly after should have been called Odhiambo, consistent with the common Luo traditional naming system based on time of birth.

But the presence of Rev Bonnke in town would turn tradition on its head.

Rev Bonnke, on that first mission to Kenya, was preaching to a captive congregation at Kenyatta Sports Ground less than a kilometre from the hospital.

Many other people left their offices to witness the big occasion during which the German preacher was also said to have performed miracles.

“My dad being among them received the news of my birth and headed to the hospital with a name in mind,” says 22-year-old Reinhard Odonga Bonnke of the event that gave him his exotic name.

“Reinhard was his proposal. My second name was to be the family name but my mother felt otherwise. She suggested the name Bonnke. Being the firstborn son, I went nameless for two days.”

It took the arrival of his maternal grandfather to solve the dilemma.

“He [the grandfather] was amused to learn that I still had no name. He gave me both the names Reinhard and Bonnke,” says Reinhard Odonga Bonnke, a student of journalism at Zetech College in Nairobi.

Over the years, Reinhard Odonga Bonnke says he has found himself in a difficult situation of having to prove his identity to people who had expected to meet a white man only for him to turn up.

“I hope to meet the evangelist Reinhard Bonnke in person this time around,” says Reinhard Odonga Bonnke.

It’s difficult to tell if young Bonnke’s prayers will be answered.

What is certain is that by the fall of dusk tonight, thousands of faithful will have heard Rev Bonnke’s unmistakably husky voice.

Evangelist Bonnke is expected to be the main speaker during the Faith Evangelistic Ministry August Conference at Nairobi Primary School.

“This a big honour and Kenyans should come in large numbers to attend our annual conference, which starts today,” Rev Wairimu told Lifestyle.

On Saturday, Rev Bonnke conducted a wedding ceremony between Robert Kinyanjui and Flora Kamila at the Nairobi Primary School grounds.

A congregation of about 10,000, including partners of the Faith Evangelistic Ministries, top government officials and chief corporate executives attended the event.

On Thursday, Rev Bonnke’s representatives presided over the consecration of the 5,000-seater Faith Evangelistic Ministry sanctuary in Karen in a colourful ceremony punctuated by soulful gospel songs and charismatic preaching sent out over powerful sound systems.

The German preacher has been on a mission to evangelise Africa from Cape Town to Cairo.

He says it all started when, as a boy, a woman in his home church in Germany received a prophecy and vision that one day he would evangelise Africa.

Now, some 50 years later, his outreach to black African nations has taken the gospel to millions of people in unrivalled style.

After attending Bible college in Wales and his ordination in Germany, he served as a church pastor before starting his missionary work in Africa.

“It was there, in the small mountain kingdom of Lesotho, that God placed upon his heart the vision of ‘the continent of Africa, being washed in the precious Blood of Jesus’ — an entire continent, from Cape Town to Cairo and from Dakar to Djibouti that needed to be reached and to hear the proclamation of the signs-following Gospel,” says a bio posted on the website of his CfaN ministry.

He began by holding meetings in a tent that accommodated just 800 people. But, as attendance steadily increased, larger and larger tents had to be purchased.

In 1984, he finally commissioned the construction of the world’s largest mobile structure at the time — a tent capable of seating 34,000 people.

“Soon, attendance at his meetings even exceeded the capacity of this huge structure, and he began open-air gospel campaigns with an initial gathering of over 150,000 people per service.

Since then, he has conducted city-wide meetings across the continent with as many as 1.6 million people attending a single meeting using towering sound systems that can be heard for miles.”

As part of a discipleship training programme, 185 million copies of Bonnke ministry’s follow-up literature have been published in 103 languages and printed in 55 countries.

In Kenya, they have been distributed to new converts in countless meetings around the country by Rev Wairimu’s Faith Evengelistic Ministries.

But perhaps nothing defines Rev Bonnke more than the passion he has for what he does.

“I want to die with the microphone in my hands. That’s my timetable,” Rev Bonnke told a Ukrainian journalist on a recent visit to the country.

For more than 10 years, Rev Bonnke has focused on Nigeria, by far the most densely pop­ulated country in Africa.

Although the Cape Town to Cairo venture is headquartered in South Africa, Rev Bonnke has announced plans to set up a sub-office in East Africa to help achieve their goal.

“In response to the call of our Lord, we are currently planning to re-structure our technical equipment so that we can hold great gospel campaigns in East Africa, too” says the evangelist in his current newsletter.

“In practical terms, that means that we are planning to divide up our Christ for All Nations equipment, continuing to use most of it in West Africa while trans­ferring a fairly small amount of it to East Africa. That sounds easier than it actually is as all components are designed to fit together and com­pared with the size of our meetings attended by hundreds of thousands of people, they are kept to a mini­mum. For that reason, we need vari­ous new items for East Africa if we wish to proclaim the Word of God there without hindrance” he says.

His West Africa gospel campaign is headquartered in Nigeria where Rev Bonnke has held a meeting with President Jonathan Goodluck.

“This in itself is an answer to prayer. Mr Goodluck is a strong and committed Chris­tian whom Evangelist Bonnke has had the pleasure of meeting and spending time with,” says the publication.

The ministry also targets other parts of the continent, including Libya, which is currently steeped in civil war.

“We had planned a gospel cam­paign in Cote d’Ivoire this year. This has now been put on hold as we watch to see how the situation develops” he says.

His next mission after Kenya will be to Ethiopia in July 2012 and later, Egypt.

“We pray that the labourers in Africa will see that the fields are ripe for harvest and that much fruit might come forth,” says Evangelist Daniel Kolenda, Rev Bonnke’s designated successor.

With ABC Bank Kenya, No more Medical and Funeral Harambees in the Diaspora.

Kenyans are the happiest people in East Africa-World Happiness study