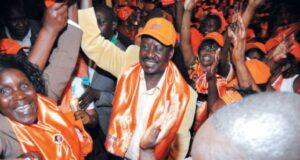 Rebellion against ODM Leader Raila Odinga in Nyanza intensified at the weekend when leaders unhappy with his leadership agreed on a strategy to breakaway by 2017.

At a meeting in a Nairobi Hotel on Saturday, the leaders who included Members of Parliament, professionals and businessmen from the region and MCA’s agreed to register a party, United Democratic Movement and begin to marketing it immediately.

“There is no turning back. We have agreed on the name of the party and its officials who will shortly register it,” said an MP who attended the meeting.

The leaders also agreed that they will market themselves through development projects across the region as they position themselves as alternative leaders.

“You will begin to see a lot of development activities especially harambees all over Nyanza. We are also asking governors allied to us to ensure they deliver development in their areas so that we distinguish ourselves from those used to empty political rhetoric,” said another MP from South Nyanza.

The leaders are also resolve to bring into their movement disgruntled ODM members across the country. The idea, according to multiple sources, is to create a national party capable of competing with the other main parties.

Raila has been facing a storm from Nyanza leaders who accuse him of poor leadership and failing to nurture party democracy.

While the rebel ODM function was busy strategising in Nairobi Raila was being booed in his strong hold of Kisumu for the first time in more than 15 years.

Raila has gone to quell tension between the youth and the Sikh community who had erected a a monument to mark100 years in of their being in Kisumu. Despite pleas from Raila the youth insisted that the monument should be brought down. It was removed yesterday.

“I believe that this is the time to offer a new political shift to the people of Nyanza and I bet Dalmas Otieno will do it because he is experienced,” an MP from Nyanza

Ugunja MP Opiyo Wandayi downplayed the heckling saying it was just a religious misunderstanding and there was no political bearing.

“We have seen many political parties formed but fizzle out immediately and the one being formed now will not be an exception. Our people will not be misled. Let it come and face us because we will deal with it properly. The times for forming tribal political parties are long gone,” Wandayi said.

On Wednesday this week Otieno is scheduled to meet the small parties to discuss how they can work together. A faction of ODM yesterday unveiled a preferred line-up to delegates from Nyanza region.

Speakers during the meeting held at Ofafa memorial hall said they will also back Raila Odinga for Party leader and Mombasa Governor Hassan Joho as the Deputy. Raila and Joho did not however, attend the meeting in Kisumu yesterday.

Kajwang’ said ODM is a national party adding that its leadership must uphold regional balance.He however, denied that the party has a preferred list.

Delegates who spoke to The Star after the meeting confirmed that they have been asked to endorse the team. The campaigns in Kisumu yesterday were also attended by Kakamega Governor Wycliffe Oparanya and ODM politicians Julius Okinda and Stephen Zani.

Oparanya is seeking the ODM Deputy Party leader slot while Okinda wants to be the party’s Organizing Secretary with Nicholas Zani seeking to be his deputy.

Yesterday, Agnes Zani said ODM leadership must reflect regional representation. Kajwang’ pointed out that the party recognizes the efforts of Coast leaders to the party.

“Coast gave ODM five Governors and 36 MPs even more than Nyanza hence the region must get positions in this party,” he said. This was in an apparent reference to Zani and Joho’s candidatures.

Meanwhile, the party’s Executive officer Magerer Lang’at said ODM is not shaken by the stiff competition exhibited by various candidates ahead of its elections. Lang’at said the tight race was a clear indicator of democracy in the party.

3 Books For You To Read Before You Invest In Something