One of the fastest growing races in the Southwest went off without a hitch on Sunday afternoon on the road heading north out of Santa Fe.

The annual Santa Fe Thunder Half Marathon and 5K Race drew a record number of entrants this year, once again attracting some of the most talented distance runners who travel to the Rio Grande corridor to train in Northern New Mexico’s dry, high-desert climate.

The marquee event was once again the half-marathon, a 13.1-mile road race that began at Fort Marcy Ballpark, rose 300 feet on the highway toward the Santa Fe Opera, then dropped 1,300 feet over the course of the final 10 miles toward the Buffalo Thunder Casino and Resort in Pojoaque.

Last year’s men’s champion, Kenyan Nelson Oyugi, finished second on Sunday to countryman Jacob Chemtai. Both men train in Santa Fe, along with fellow Kenyan men Benard Langat and Stanley Boen, all of whom finished in the top eight overall.

Oyugi set the course record last year, but his time of 1 hour, 3 minutes and 3 seconds was nine seconds slower than Chemtai’s winning time.

Ethiopian Simeg Yeshanbel won the women’s race, dominating the field with an overall time of 1:11:30. She averaged 5 minutes, 27 seconds per mile, a full 18 seconds faster than anyone else.

Sarah Kiptoo was runner-up for the second straight year. The Kenyan who trains in Santa Fe ran at a 5:45 rate but was still nearly four minutes slower than her Yeshanbel’s blistering pace.

Los Alamos resident Nikol Strother was the women’s 5K champion in a time of 20 minutes, 41 seconds. She was nine seconds faster than Santa Fe’s Esperanza Cortez, who finished second.

The men’s 5K champion was Trevor Merhege in 16:46. Albuquerque’s Patrick Ortiz was second, 15 seconds off the pace. 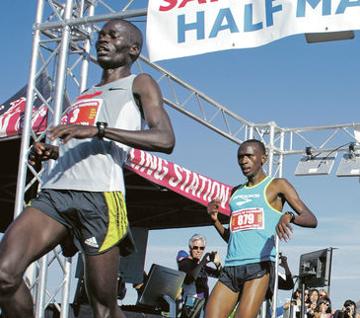 I did not meet ‘desperate’ Wetang’ula, Eugene Wamalwa says