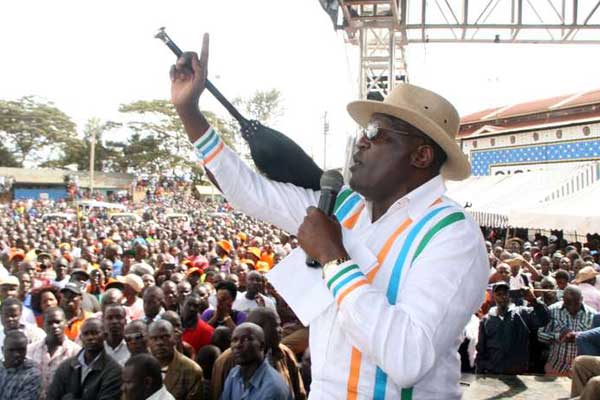 The Standard on Sunday can authoritatively reveal that the Parliamentary honours committee, tasked with the mandate to nominate exemplary members for the annual Head of States’ recommendation, has rejected Muthama’s name.

The tyranny of numbers played out to Muthama’s disadvantage after top Jubilee leadership accused him of constantly insulting the President, having pending court cases and mistreating his wife.

The honours committee, which brings together leadership of both Houses and the Parliamentary Service Commission held two meetings on Friday, which discussed the thorny matter, only to reject Muthama’s nomination.

Senate Minority Leader, Moses Wetang’ula (Bungoma) is reported to have clashed with his colleagues at the meeting, while deliberating on whether to honour Muthama, National Assembly Deputy Minority Leader Jakoyo Midiwo (Gem) and John Mbadi (Suba).

The Jubilee brigade cleared Midiwo and Mbadi but declined to approve Muthama’s name to join the list of Parliamentary leadership and exemplary members, who have performed extremely well.

“Wetang’ula was angered by the decision to deny Muthama this opportunity. However, his efforts to put up a spirited fight flopped,” said a member who declined to be named.

The committee, co-chaired by the two Speakers; Ekwee Ethuro (Senate) and Justin Muturi (National Assembly) has been meeting to agree on the names to be forwarded to the national honours committee for approval.

“A top Jubilee official was of the view that Muthama has many pending court cases and is not fit to be honoured. Another one also censured the Senator for having problems with his wife and being disrespectful to the presidency,” revealed a committee member, who sought anonymity and faulted the actions of their colleagues. He continued: “The officials took issue with the fact that Muthama always abuses the Jubilee government and President Uhuru Kenyatta,”.

Efforts to get a comment from the two speakers proved futile, however, Senate Clerk Jeremiah Nyegenye declined to comment on the matter, saying he and his National Assembly counterpart, Justin Bundi are substantive members by statute.

“We are not secretaries of the committee. The speakers are the spokespersons,” said Nyegenye on phone.