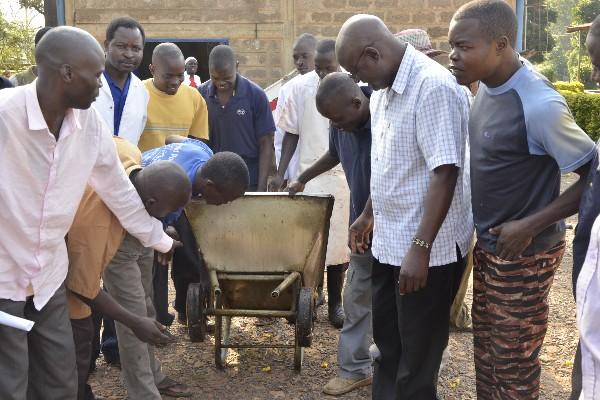 Hundreds of youths stormed a slaughterhouse in Bungoma county for a look at 10 wheelbarrows bought at Sh109,000 each by the Agriculture ministry.

Waving pacards and twigs, the youths, majority of whom were juakali craftsmen, demonstrated against the purchase, which has raised concerns of fraud by county executives.

“We as juakali artsians have looked at those wheelbarrows; they can’t cost more than Sh3,000,” said their chairman Moses Wekesa.

The demonstrators, who disrupted business with marches on Bungoma town’s main streets, said the protests will only end once action is taken.

The marched to Governor Kenneth Lusaka’s office demanding to speak with him.

It took the intervention County Assembly Majority leader Majimbo Okumu for them to calm down.

Leaders, led by Senator Moses Wetang’ula, opposed the purchase of the wheelbarrows saying those responsible must be arrested and prosecuted.

“This is just but a tip of the iceberg about mega corruption at the Bungoma county government. Enough is enough,” Wetang’ula said.

He said Lusaka had “rubbished” several of his notifications on corruption rings.

Lusaka earlier said the purchase, following a committee’s recommendation after a request by the ministry, was a “wastage of public funds”.

A preliminary audit report showed officers at the Veterinary department had inflated the price.

“After receiving the preliminary report I was shocked to learn that the officers had bought wheelbarrows at the highest cost, but I am still waiting for the full report so that I can act accordingly,” he said.

The governor said he ordered the survey of the wheelbarrows’ market price after the Tendering committee reported that it was between Sh78,000 and Sh112, 320.

The Public Procurement Oversight Authority indicates the average cost of a wheelbarrow as Sh3,469.

Its market price index released in June states that the equipment should cost Sh3,453 in Nairobi, Sh3,900 in Mombasa and Sh3,274 in Kisumu counties.

But speaking in his office on Monday, Lusaka said the wheelbarrows are a rare find and longlasting.

He said they are made of “stainless and non-carcinogenic material that is insoluble in various reagents used in the food industry”.

Citing the material used to make the wheelbarows, county officer in charge of veterinary services Wycliffe Wangwe said the deal was fair.

“Ordinary spoons cost as little as Sh10 while stainless and clinically advised ones go for as much as Sh130 a piece,” he said.

He added that ordinary wheelbarrows are painted to prevent rusting while those used in the food industry are “special ones with special materials that protect the public from food poisoning”.

“The workmanship could be poor but the material is worth the price,” he said.

Residents demonstrate against the purchase of 10 wheelbarrows at Sh109,000 each in Bungoma town on Tuesday. Photo/JOHN NALIANYA

Turkana to English translator needed for documentary for international broadcast