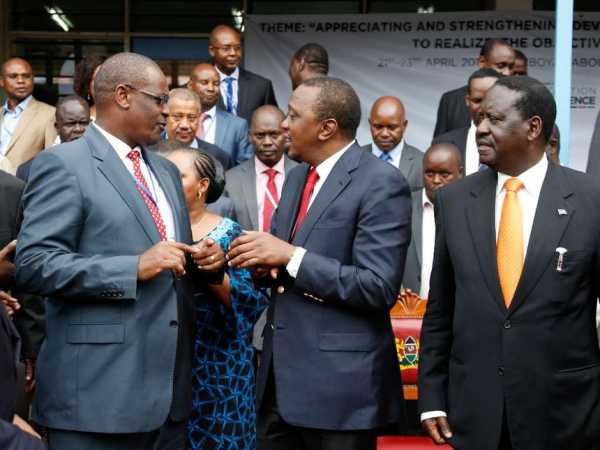 NAIROBI, Kenya, Mar 27 – In an effort to show himself as not having a problem with governors, President Uhuru Kenyatta invited Nairobi Governor Evans Kidero to address golfers at an event marking the end of the 49th Kenya Open held at the Muthaiga Golf Club.

“I had to allow Kidero to speak because after Mombasa people might say I do not allow governors to speak in this country,” the President is quoted as saying by his press team.

The Presidential Strategic Communications Unit sought to drive the point home by pointing out that other senior government officials were not extended the same opportunity.

“The President, who presided over the prize giving ceremony, insisted the Nairobi Governor makes remarks at the ceremony where even former President Mwai Kibaki and Cabinet Secretaries Hassan Wario (Sports) and Najib Balala (Tourism) did not speak.”

President Kenyatta has of late grabbed headlines for engaging in a war of words with governors allied to the Orange Democratic Movement including Turkana Governor Josephat Nanok who he called, “shetani,” and Mombasa Governor Ali Hassan Joho whom he told, “I am not your wife.”

The outbursts have led some to accuse him of being temperamental and according to ODM Party Leader and former Premier Raila Odinga, “a bully in need of our prayers.”