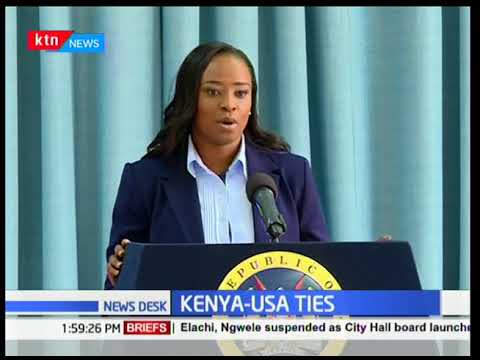 In fast spoken Kiswahili, Dena who is now state house Deputy Spokesperson made a debut briefing where she disclosed the president’s itinerary saying the head of state was set to travel to Addis Ababa, Ethiopia tomorrow to attend Intergovernmental Authority for Development (IGAD) meeting.

Looking neat in her in navy blue trouser suit and sky blue shirt Kanze said the meeting between heads of states will focus on strategies to ensure peace was restored in the war-torn South Sudan.

Conflict has rocked South Sudan for many years as President Salva Kiir and Riek Machar, who was once his vice president, fight over country of the country.

Asked whether Opposition leader Raila Odinga was invited by the head of state to the IGAD meeting, Kanze said the event involved only the heads of states.

Raila has been instrumental in the quest for stability in the country. Recently, he met President Kiir in Juba and later met with Machar.

The IGAD meeting will come barely a day after the world celebrated World Refugees Day.

Several locals from South Sudan have sought refuge in Kenya due to the escalating fighting in the country as Machar and Kiir fight for control over the country.

Also, Kanze announced the president would be in Kajiado on inspect the progress of the second phase of Standard Gauge Railway (SGR) and later launch governors’ convention.

Further, the Deputy Spokesperson said the president was expecting a major delegation from United States including investors.

The briefing was not flawless though and at some point Kanze addressed the media as “mtazamaji” (listener) but quickly apologized that she was still adjusting to her new role. Story of Kenyan Pilot Peninah Karanja Who Made History in Rwanda