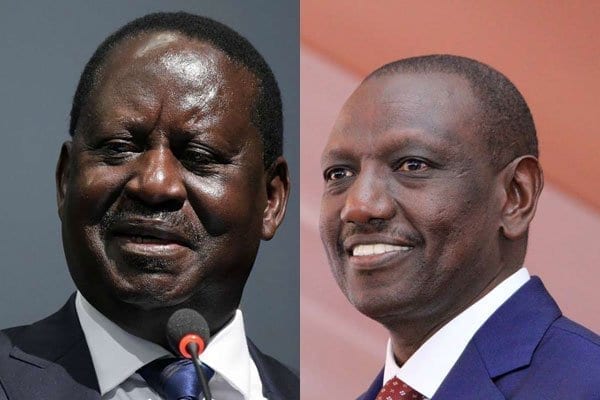 Deputy President William Ruto and ODM leader Raila Odinga will today share a podium amidst accusations and counter-accusations among their allies over the March 9 deal the opposition leader made with President Uhuru Kenyatta.

The two will meet today during the burial of former minister Henry Obwocha in Nyamira County.

The meeting comes at a time when the Kalenjin Council of Elders and that of the Luo community have asked President Kenyatta to back Mr Ruto and Mr Odinga, respectively, for the 2022 State House race.

While the Kalenjin elders want President Kenyatta to honour a deal they said was made in 2013 when the Jubilee duo were first elected, their Luo counterparts argue that Mr Odinga was best-placed to continue the spirit of the historic pact he made with the president in March this year.

“The implementation of the nine-point agenda agreed on by the two leaders (Mr Odinga and President Kenyatta) can only be fully implemented by themselves. If President Kenyatta retires in 2022, then Mr Odinga, as the cosignatory to the March 9 deal, will be the best placed person to effect the resolutions,” said the Luo council’s executive director, Mzee Owino Nyady, on Thursday.

Major (rtd) John Seii from the Kalenjin Myoot council of Elders, on his part, said: “In 2013, Myoot elders agreed to support Uhuru Kenyatta and, in return, he should back Mr Ruto when it comes to his quest for the presidency.”

Mr Obwocha died last week after collapsing at his home in Nairobi.

He was mourned as a distinguished public servant, and a ‘brilliant economist.’

“As a member of the National Economic and Social Council and a brilliant economist, he played an important role in drafting Vision 2030 that informs our aim to transform Kenya into an industrialised, middle income economy with high quality of life for its citizens,” Mr Ruto said of the ex-minister.

Mr Odinga and Mr Ruto are also expected to show a different podium tomorrow, this time in the company of President Kenyatta, during the wedding of Emurua Dikirr MP Johana Ng’eno.

The Kanu MP will wed Nayianoi Ntutu at Emurua Dikirr Secondary School in a function expected to be attended by tens of his colleagues in both houses of Parliament.